There is only one reason to consider Empire Co. Ltd. shares after the debacle of the company's second-quarter financial results: They're cheap. But so what?

Empire is better known as the parent of the Sobeys grocery-store chain – but now, sadly, best known for blowing $5.8-billion for Canada Safeway's stores in Western Canada in 2013 and becoming a poster child for destroying shareholder value.

Investors cheered the deal for Safeway initially amid promises of greater efficiency and a larger national footprint, both of which are highly desirable in the low-margin grocery business. The shares rose to a high of $31.60 by early 2015, but have since slumped more than 50 per cent to just above $15 at closing on Monday, or the lowest level in about six years.

While that might look like a tempting, bargain-basement price, you could be waiting a long time for the news to improve – and in the meantime, things could get much worse.

The news right now is abysmal, of course. Last week, Empire reported that its quarterly profit collapsed to just 12 cents a share, down from 40 cents a share last year (after making some one-time adjustments).

Sales at grocery stores open for at least one year fell 2.6 per cent, driven largely by a slump in Western Canada where Safeway stores operate, even as rival Loblaw and Metro have been reporting rising same-store sales.

Blame it on a merger that hasn't delivered the expected savings, but has managed to rattle existing Safeway customers with supply, brand and pricing issues. The weak Alberta economy hasn't helped matters either.

To be sure, the grocery sector is remarkably resilient. Loblaw Cos. Ltd. endured years of headaches last decade as it adjusted to the arrival of Wal-Mart Stores Inc. After Loblaw shares fell 65 per cent between 2005 and 2008, corresponding to tumbling profit, the shares rebounded more than 165 per cent as the company found its stride.

Empire's Sobeys could embark upon a similar recovery, but it certainly isn't clear whether the shares have hit their lowest point yet or when a recovery would begin.

Empire has hired Boston Consulting Group to find ways to streamline its operations, raising the question of why management isn't able to come up with a plan of its own. The company is also considering launching a low-cost supermarket in Western Canada, which may only raise its operating costs.

There are also significant near-term hurdles. Notably, Empire's credit rating is at risk of being downgraded to junk status after it releases its third-quarter results in March, according to Andrew Calder, an analyst at RBC Dominion Securities.

A downgrade would raise its borrowing costs and likely scare off some institutional investors.

Some equity analysts are left scratching their heads over how low the stock can fall under the weight of these challenges.

"Given the pronounced decline in the stock price and the ongoing deterioration in earnings, it is difficult to assess where the stock offers compelling value," Peter Sklar, an analyst at BMO Nesbitt Burns, said in a note.

If results continue to deteriorate, he could see the share price falling to book value, or the theoretical value of a company if it were liquidated. That's $13.50, which is another 10 per cent below the current share price. And if Empire succeeds in cutting costs and stabilizing sales? Mr. Sklar believes the shares could rally to $16, or up about 5 per cent.

While this analysis suggests the downside is limited, so is the upside – which looks like a good reason to sit on the sidelines. 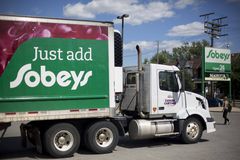 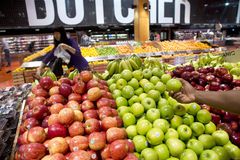 Why you should set a ‘sell’ price before you buy a security
Subscriber content
November 2, 2016
Follow David Berman on Twitter @dberman_ROB
Report an error Editorial code of conduct