Brian Belski, Bank of Montreal's chief investment strategist, is incredulous over the continued investor confidence in the energy sector. In a report released Friday, Mr. Belski writes (his emphasis), "Not Everything is Priced In + Clients CONSUMED with 'Picking the Bottom.'"

For Mr. Belski, the continued fascination with energy stocks suggests that domestic investors are "underestimating the potential depth of the current pullback."

The urge to bottom-fish is underpinned by an understandable but very dangerous mistake: Investors are assuming that because stock prices are down and valuation levels are attractive, that energy stocks are cheap. Nothing could be farther from the truth – equities in the sector will get more expensive and less attractive by the day because future revenue and profits will be far lower than the past.

In terms of trailing price to cash flow, the S&P/TSX energy index looks attractive at 5.9 times, well below the five-year average of 7.7 times. There are two problems with this, however.

First, trailing multiples don't really matter any more. The 42-per-cent drop (in Canadian dollars) in the value of crude means cash flow for the next 12 months is inevitably going to be much lower than it was last year. The 2014 results will be a poor guide to 2015.

The second problem is that price-to-cash flow multiples based on analyst estimates for 2015 aren't relevant yet because, for whatever reason (possibly a desperate hope for a full commodity-price recovery), estimates have not been adjusted fully for the fall in the energy price.

Estimates for cash-flow growth in the next 12 months have been cut by 7 per cent since July. But as the chart implies, current crude prices mean forward cash-flow forecasts are likely to be cut much further. The current estimate for S&P/TSX energy index cash-flow per share is $442. The chart suggests this number will actually wind up closer to $300. 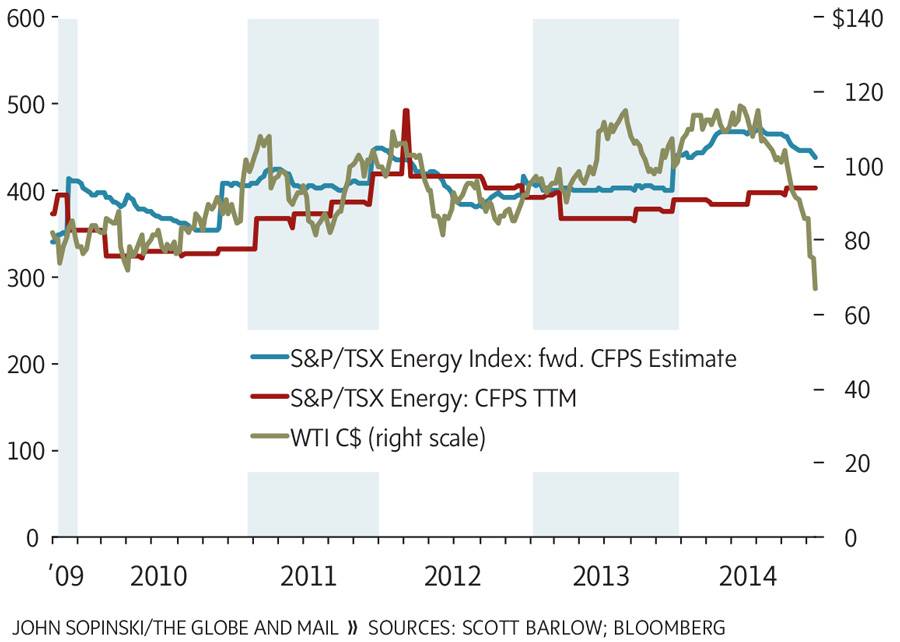 The management teams will do everything in their power to protect cash-flow generation, so $300 is an overly pessimistic forecast. Yet, even if we split the difference at $375, this has a huge effect on valuation levels.

With $442 in cash flow, the S&P/TSX energy index is trading at 5.4 times forward earnings. This is a 30-per-cent discount relative to the five-year average of seven times.

The more realistic $375 cash-flow estimate changes the forward sector price to cash flow multiple to a far less attractive 6.3 times, a small discount to periods where oil was trading at $100.

As Mr. Belski warns, investors can't assume that the sector is cheap just because stock prices are lower. The S&P/TSX energy benchmark is more than 40-per-cent below its summer peak, but based on the numbers above, it looks fairly valued at best.

The biggest positive in all this for investors is the possibility of an attractive entry point in early 2015. Stocks in the sector should react negatively to lower growth forecasts, and finally reach prices that are legitimately attractive for long-term investors.