For readers in a hurry, here's the takeaway from this week's technical analysis of the S&P/TSX Composite: Don't buy anything here unless you intend to stare at your quote screen constantly afterwards, with your finger over the "sell" button.

Energy and precious metals stocks have driven the Canadian benchmark to significantly overbought levels according to Relative Strength Index (RSI). The entire TSX is not just over the RSI sell signal of 70, it's almost at 80. 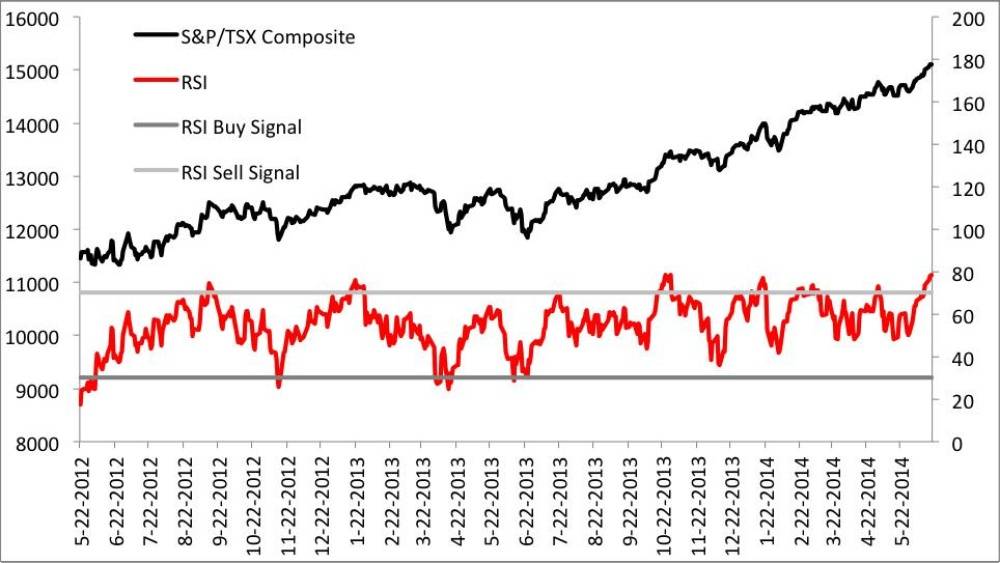 That said, the need for caution could very well be temporary. The RSI with the best record for finding entry and exit levels for stocks uses only 14 days of data, which means things could be fine by the end of next week.

But for now there are 50 overbought TSX stocks – 20 per cent of the index – and only one oversold, snowmobile-maker Bombardier Recreational Products, that until now, I'd never heard of before. Valeant Pharmaceuticals International Inc. lies just above oversold territory with an RSI reading of 31 after a 3.1 per cent decline in the past five trading sessions.

Could precious metals and energy stocks continue higher? Sure, but in the short term, the odds of a pullback are high.

In the case of gold, CNBC commentator Art Cashin noted that the sharp surge in the gold price when it hit $1,300 (U.S.) was likely indicative of short covering. The effects of short covering rallies are usually dramatic, but short-lived.

Energy stocks and crude prices have been driven by news flow from Iraq and, while political stability in that country would be a tragically novel prospect, any cessation in fighting will probably result in a correction in the sector.

As always, technical analysis should be accompanied by fundamental research before any investment decisions are made.