They just sold a house in the Greater Toronto Area for more than two-and-a-half times what they paid in 2006. The couple will downsize to a condo in Ottawa this summer and expect to have $300,000 left over to invest. Their question: Where should they invest their money?

Roger and Angela's story ties together a few of today's highest profile financial storylines. They're boomers – both in their mid-60s – who want to squeeze some value out of their gains in real estate to help fund their retirement. They're also very conservative investors who have been doubly jolted by volatile stock markets and the troubles at Home Capital, a GIC-issuer with some of the best rates around.

Roger and Angela sold their three-bedroom home in late May for $850,000, which compares to a purchase price of $320,000. As well as they did in the sale, they still had a brush with the No. 1 risk facing all boomers who hope to cash out of a house that has appreciated in value – a weakening real estate market.

Angela said she and Roger were hoping for between $900,000 and $950,000, but found when they put the home up for sale that the market had cooled just a bit. Still, they will have more than enough to pay the $475,000 cost of a large 1,763-square-foot, penthouse condo in Ottawa with two bedrooms and a den. "We could never have afforded that in Toronto – never," she said.

The goal for the $300,000 left over after paying for the condo and all moving expenses is to supplement retirement income supplied by Roger's modest pension, his continuing earnings from part-time work and consulting, personal savings for both spouses in registered retirement savings plans and tax-free savings accounts, and an annuity that Angela bought a few years ago.

Many people will immediately think of dividend stocks for investment income in this case, but Roger and Angela are wary. The couple lost a significant amount after they sold following the stock market crash of 2008-09 and are haunted by the experience. In particular, they question whether it makes sense to invest in stocks now, after last year's big rally. "We're really not very keen about going back into the market, especially now when everything so high," Roger said. "We're pretty risk-averse."

Asked to offer some input for Roger and Angela, financial planner Rona Birenbaum of Caring for Clients wanted to know more about their goals for the money. Yes, the couple want to use it to generate income. But are they okay with drawing down on that money, or is it important for them to keep their $300,000 intact?

Roger and Angela are firm on this – they want to leave the money for their children. "Our kids keep telling us not to do that, to spend the money," Roger said. "We say, 'Yeah, that's nice.'"

Ms. Birenbaum's reading of Roger and Angela tells her they require an investment that offers zero volatility and preserves their capital. "Really, the only investment that has the requirements they're looking for are GICs," she said. "They will have to hold their nose and accept the yields."

Aside from Angela's annuity, the couple have already been using GICs. They hold them in an online brokerage account that gives them access to a wide variety of GIC issuers. Among Angela's holdings right now is a $14,000 GIC from one of Home Capital's divisions that matures in August.

Home Capital is the troubled alternative mortgage lender that has been raising GIC rates lately to attract the money it needs to fund its lending activities. Oaken Financial, a Home Capital brand that deals directly with the public rather than through brokers or advisers, offered 2.6 per cent on a one-year GIC late this week and 3.1 per cent for five years.

"If you're CDIC-insured, other than maybe a little bit of delay, you're going to get your money," she said. "The problem is that every day, you're going to look in the paper and see the headlines. And it's going to make you feel nauseated. It's not worth it."

Ms. Birenbaum suggested a three-year GIC ladder for Roger and Angela, which means dividing their money into three chunks that mature in one, two and three years. Maturing GICs are reinvested for a three-year term. GIC ladders are traditionally spread over five years, but Ms. Birenbaum doesn't think the yield bonus from locking in for five years is worth it right now.

Brandon Brot, principal at GIC Wealth Management Inc., put together two laddered GIC portfolios for Roger and Angela – one with Home Capital exposure and one without. The first uses Home Bank and Home Trust GICs to generate an average yield of 2.4475 per cent and income of $7,342.50 before tax in the first year.

The second uses GICs from other companies to generate an average return of 2.28 per cent, or $6,850 before tax. "The difference is just under $500 in income in Year One," Mr. Brot said in an e-mail. "However, when you factor in taxes, the difference is likely much less."

Ms. Birenbaum said it's possible to generate higher yields than GICs offer through a diversified portfolio of bonds. "We could be very smart and create a fixed income portfolio that is more likely to generate 3 to 4 per cent," she said. "But you're going to introduce complexity and a little bit of volatility. From the sounds of it, that's not suitable for them." 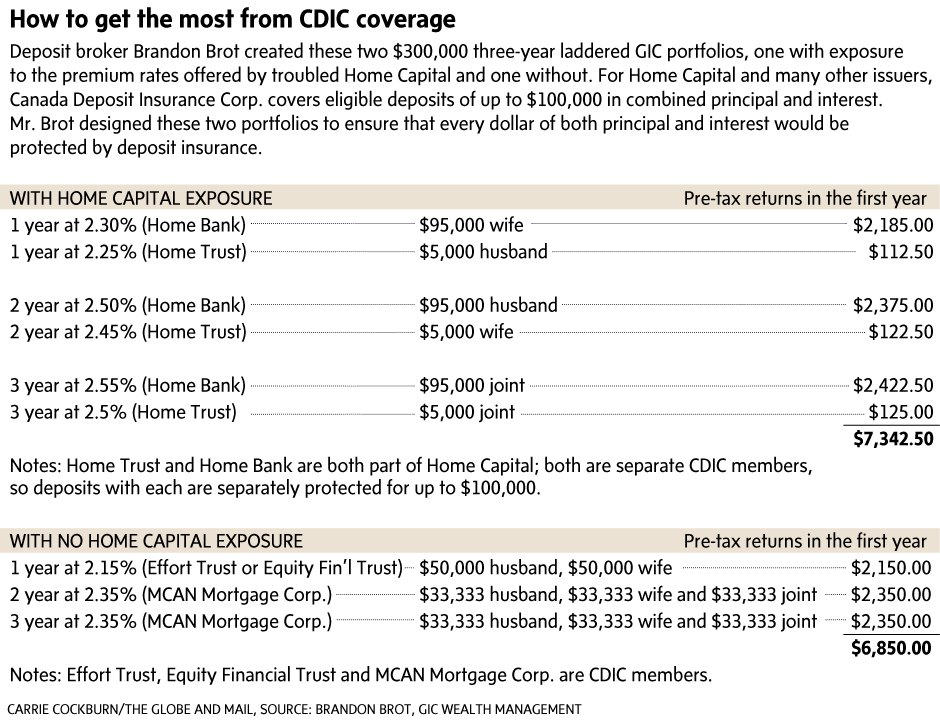 Downsizing to a condo? Our calculator shows how little you’ll save
October 21, 2015
The true cost of retirement: What the finance industry doesn’t want you to know
Subscriber content
May 26, 2017 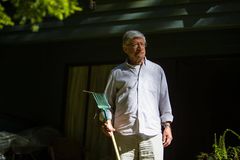 Downsizers cash in – driving the upscale condo market
February 15, 2017
Follow Rob Carrick on Twitter @rcarrick
Report an error Editorial code of conduct
Due to technical reasons, we have temporarily removed commenting from our articles. We hope to have this fixed soon. Thank you for your patience. If you are looking to give feedback on our new site, please send it along to feedback@globeandmail.com. If you want to write a letter to the editor, please forward to letters@globeandmail.com.
Comments