Inside the Market's roundup of some of today's key analyst actions.

Citi Research downgraded Sunoco LP (SUN-N) and cut its price targets as its most recent quarterly results showed an increase in operating expenses, which puts into question its leverage and distribution.

"Operating expenses have surprised to the upside two quarters in a row, and we now believe that SUN's leverage and distribution appear unsustainable unless per gallon margins remain significantly above normalized ranges for the foreseeable future. While per gallon margins are difficult to forecast for any given quarter, we believe significant headwinds exist from rising crude prices and sharply declining RIN [renewable fuel credits] prices."

"SUN's adjusted leverage in the third quarter stood at 6.0-times, and we believe these metrics would trend higher causing SUN to violate its covenants absent an equity infusion. On the surface, SUN's third quarter reported distribution coverage of 1.25-times appears strong. However, third-quarter wholesale margins were 43 per cent above the midpoint of SUN's normalized range," the analyst wrote.

"In addition, coverage benefited from a one-time tax add-back to DCF [discounted cash flow]. SUN's third-quarter coverage would have been 0.57-times adjusting for normal margins, no tax add-back, and removing $13.7-million (U.S.) of expenses related to moving corporate offices."

"One of the biggest pushbacks against NYX has been the lack of EBITDA [earnings before interest, taxes, depreciation and amoritization] to cash flow conversion, despite very aggressive acquisitions since NYX went public about two years ago. This dynamic could be poised to change over the next few quarters. Third-quarter 2016 results were relatively less noisy and cash flow is finally starting to peek through from behind 'one time' charges."

He reduced his target price by 50 cents to $3.50 per share and kept his "speculative buy" rating.

"Following a weak 2015, we had made AGI one of our "Top Picks" for 2016 as we believed the company would 'get things right,' particularly at Young-Davidson. Given the recent decline in share price, we have upgraded AGI to a "Buy" as Mulatos outperformed our 2016 third-quarter expectations while Young-Davidson (Y-D) continues to ramp-up on schedule. After making some minor revisions to our model, our NAV [net asset value] per share declines slightly to $11.40. As a result, our $11.50 target, based on 1-times NAV/sh, remains unchanged."

The analyst upgraded the stock to "buy" from "hold" and maintained the $11.50 price target.

National Bank Financial has upgraded its target for Exchange Income Corp. (EIF-T) with an eye on it potentially being included in the S&P/TSX composite index.

"Given a sharp up-tick in market capitalization following a more than 50 per cent share price increase year to date, EIF is well-positioned to be added to the S&P/TSX Composite. We estimate the inclusion equates to incremental demand for about 1.2- to 1.6-million shares, reflecting approximately seven days average volume or  about 4 per cent of public float. EIF has been somewhat of an orphan institutionally since its 2004 IPO owing to its diversified/conglomerate business model, but with the current portfolio focused almost entirely on aviation/aerospace and index inclusion on the horizon we argue investor interest improves," wrote analyst Trevor Johnson.

He kept his "outperform" rating but boosted his price target to $47 from $42.

RBC Capital Markets is upgrading its rating on Tembec Inc. (TMB-T) as the company improved its outlook and reduced costs.

Analyst Paul Quinn wrote that there is a "significantly improved outlook for specialty cellulose (SC) for 2017  [as] TMB's top four clients have renewed 2017 contract volumes and management  is now guiding to a $90 (U.S.) per tonne increase in price realizations on about 200,000 tonnes of volume in SC (65 per cent of volumes confirmed), an impressive uptick in both price and volumes."

"While uncertainty surrounding the SLA [Softwood Lumber Agreement] trade file remains, we are encouraged by an improved outlook for the company's specialty cellulose business and recent cost improvements in its Paper Pulp business," he wrote in a note.

Mr. Quinn upgraded the stock to "outperform" from "sector perform" and boosted his target price to $1.75  from $1.25.

Goldman Sachs downgraded 3M Co.  (MMM-N) to Sell from Neutral with a price target of $159.

Mizuho Securities analyst, Neil Doshi, reiterated his Outperform rating on shares of Facebook (FB-Q) suggesting that the increased expense growth outlook for 2017 and chief accounting officer leaving represent "headline risks," but suggested investors continue to by the stock on dips. He maintained his price target of $146.

Mizuho Securities maintained a Neutral rating on Abercrombie & Fitch (ANF-N), but cut its price target to $15 from $20, after the company disappointed with its third quarter earnings report. Its third quarter EPS was 2 cents, far from the Street's expectation for EPS of 20 cents.

Jefferies reiterated a Buy rating on Gap Inc. (GPS-N), and raised its price target to $36 from $32, following the company's third quarter earnings report when management reiterated its  2017 fiscal year guidance. 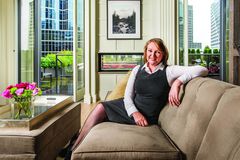