Bank of Canada Governor Stephen Poloz's surprise rate cut was not designed to rescue the domestic equity market, but it might have done so nonetheless.

The shape of the Government of Canada bond curve – the difference between shorter and longer-term yields – is linked to the future performance of the S&P/TSX Composite index through the banking system. Banks borrow funds at short-term rates and lend them to customers at long-term rates. The larger the difference between these rates, the more profits lenders make, and the more motivated they are to increase lending. There is more lending, and thus more investment and economic activity, when the yield curve is steep.

The effects of interest rate policy on equity markets usually take about 24 months, as the chart below illustrates. At the far right hand side of the chart, the flattening of the yield curve can be seen clearly. From December of 2013 to Jan. 16, 2015, the curve had flattened almost exactly 100 basis points (from 160 basis points to 66), signalling trouble ahead for equities down the road. 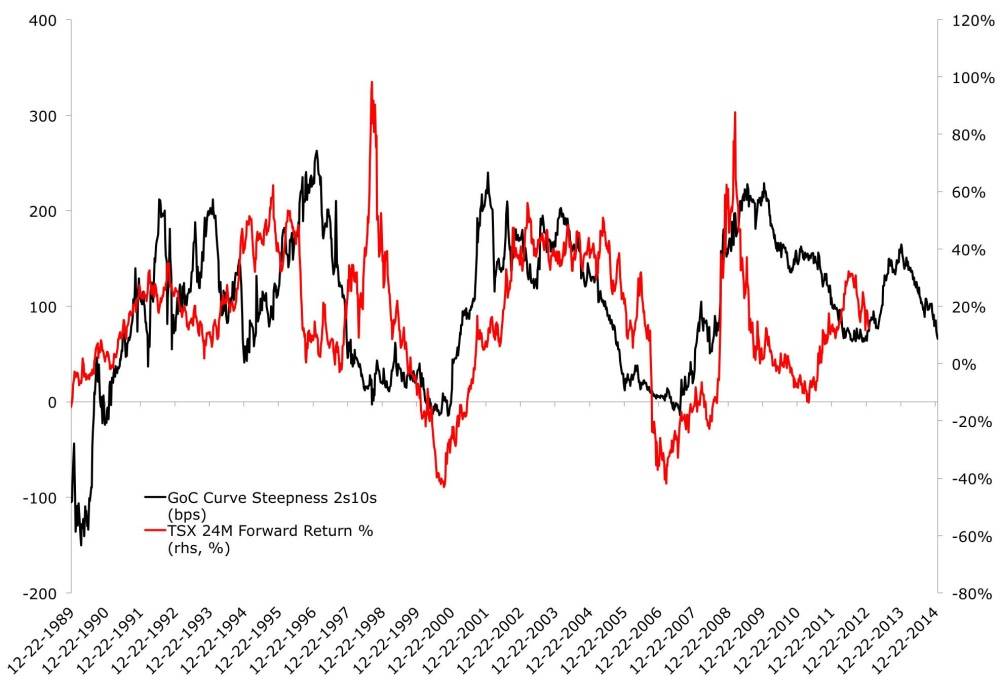 The yield curve is clearly not the sole determinant of corporate profits and TSX returns. Oil prices, the main driver of the abrupt change in Bank of Canada policy, are only one example of the factors that are well outside the control of monetary policy yet that affect stock prices.

But the yield curve has been an effective indicator of future equity returns for a long time. Flattening yield curves provided stern warnings of upcoming market upheaval in the 1997-1998 period and, more pointedly, from 2005 to 2007. Plus, if the Bank of Canada takes the curve seriously, shouldn't investors?