When I was a kid, we took water for granted. It flowed freely from the ground (we actually had one of those old-fashioned pump handles in our back yard) and it was all around us in the environment (I grew up on the shores of Lake Michigan). No one would ever dream of paying for water. Anyone who suggested that one day the world would be swamped by billions of plastic water bottles would have been deemed a candidate for the funny farm (as we called it then).

How times have changed. Water has now become a valuable and increasingly scarce commodity. In California, residents grapple with rationing restrictions as forests burn and the rich farmland of the Great Central Valley dries up. But that's not the only state that's suffering. According to the Centers for Environmental Information, 15 per cent of the U.S. was suffering from severe drought conditions at the end of September with Texas, New Mexico, and Arkansas among the hardest-hit regions. Here in Canada, the situation isn't as dire but parts of Alberta have experienced very low rainfall this year.

The crisis is international. In Europe, rivers are at their lowest level in years and some key crops have been decimated. Southeast Asia, including the east coast of India, are experiencing dry conditions. Drought conditions in parts of Africa, especially the equatorial region and the north, have persisted for years, forcing massive population displacements. It's a similar story in parts of South America and Australia.

And if the climate change forecasters are to be believed, it's only going to get worse.

Not surprisingly, some people are looking for advice on investing in companies that are working to find solutions to the growing water shortage. Recently I received an email from a reader who is looking for water-themed stocks to add to his portfolio, which already has a 4 per cent water weighting.

We currently have two stocks that qualify on my newsletter recommended list. One is American Water Works Company Inc (AWK-N), a wastewater utility that was first mentioned in June 2014 at $48.16 and closed on Oct. 30 at $57.36 (U.S.). The other is Xylem Inc. (XYL-N), which operates in all the major segments of the water industry. It was recommended in May of this year at $37.14 and closed on Oct. 30 at $36.41, so we've yet to see a profit on this one.

Overall, the water sector is not doing as well as you might expect. The need is obvious, the growth potential is clear, but the net result from an investment perspective is not all that exciting. I checked the list of U.S. water-related ETFs on ETFdb.com and found that three of the four are in negative territory so far this year, with one down more than 10 per cent. Only one was showing a small gain of less than 1 per cent.

We have only one water-based ETF in Canada, the iShares S&P Global Water Index Fund (CWW-T). It was recommended in one of my newsletters just over two years ago (July 2013) $19.65 (Canadian). It closed on Oct. 30 at $28.11 plus we have received distributions of $0.80 per unit for a total return of 47 per cent. The three-year average annual compound rate of return is just over 20 per cent.

Those look like great returns but this is an unhedged fund so a large part of the profit relates to exchange rate gains. The U.S.-based equivalent to this fund that trades in New York under the symbol CGW has not done anywhere near as well, with a year-to-date return of about 2 per cent.

Just over a year ago, Kiplinger published a column by Kathy Kristof recommending five U.S. water related stocks to watch. The results have not been encouraging. The companies were:

Calgon Carbon (CCC-N). This Pittsburgh-based company provides solutions for purifying water, air, food, etc. Because of new U.S. clean water regulations that come into effect in 2016, its ballast treatment services are expected to provide a big boost to revenue and profits. Investors haven't bought into that story yet, however. The shares were trading at $21.23 (U.S.) at the time the article came out; on Friday they were at $17.20.

Mueller Water Products (MWA-N). Based in Atlanta, Mueller manufactures and distributes a variety of water-related products such as valves, meters, piping components, and the like. It also provides services like leak detection and pipe condition assessments. It clients are mainly corporations, utilities, and public services such as fire departments. The stock is seen as a play on the need to repair water infrastructure in the U.S. but here again investors aren't enthusiastic. The shares were trading at $8.77 in August 2014; they are now at $8.80 so they have barely moved.

Rexnord Corp. (RXN-N). This is another manufacturer of water-related products, including couplings, seals, faucets, and flush valves. Based in Milwaukee, the company sells into both the U.S. domestic market and overseas. The shares were trading at $26.93(U.S.) at the time of the Kiplinger article. They went into a steep slide in May, from which they have yet to recover, closing on Friday at $18.48.

Xylem (XYL-N). When we recommended this stock in May, we described Xylem as "a very focused water play in an industry that is highly fragmented. Growth is generated by all the things that are troubling California: water scarcity, urbanization, population growth, environmental protection issues, and infrastructure needs. The company operates in all the major segments of the water industry, such as transportation, treatment, irrigation, industrial water treatment, building services, and testing. It also manufactures pumps, valves, filtration equipment, and biological disinfection technologies. As well, it provides an analytics platform to aid municipalities and utilities in making the correct infrastructure investments." This stock has held up better than most of the others in this segment but it is still trading slightly below its recommended price of $37.14 (U.S.) .

Pentair (PNR-N). This is a British-based manufacturer that trades in New York as an ADR. It offers a wide range of water related products and services including pumps, filtration systems, automated controls, repair services, etc. Kiplinger had high hopes for this one but the recent third-quarter report saw a 13 per cent year-over-year drop in earnings per share. The stock closed on Friday at $55.92 (U.S.) , down from $68.53 when the article was published.

Some water utilities are a better bet than the equipment manufacturers at this time. American Water Works is up almost $10 since being recommended.

However, other utilities are suffering because their customers are using less water and supply is harder to come by, at higher costs. One example is SJW Corp. (SJW-N), which is based in San Jose, Calif. It is near the heart of one of the worst drought areas, in a state that has imposed severe water use restrictions.

The company provides water service to about 230,000 households and businesses in the San Jose and Cupertino areas and has small water supply service in Texas. It is also in the real estate business, operating commercial buildings in Arizona, California, and Tennessee and holding undeveloped land in the latter two states.

Third-quarter results released on Oct. 28 gave an indication of the extent of the problems it is facing. Operating revenue in the quarter dropped to $83-million (U.S.) from $125.4-million in the same period of 2014. Part of that was due to windfall revenue received in the comparable quarter last year but $15.3-million related to lower customer usage. Net earnings were $9.5-million ($0.46 per share, fully diluted) compared to $38.4-million ($1.88 per share) in the prior year.

The bottom line is that while some water-related stocks appear to have long-term potential, this industry is no instant bonanza. In general, the utilities are faring better than the manufacturers at present although that could change down the road. What would really catch the attention of investors is a company that devised a cost-effective way to provide new supplies of water to drought-stricken areas but I have not been able to find one that fits the bill.

Therefore, my advice at this time is to hold shares of AWK and Xylem for exposure to the U.S. market. If you want international diversification, add CWW to the list.

Gordon Pape: A drilling company to take a flyer on
Subscriber content
October 21, 2015 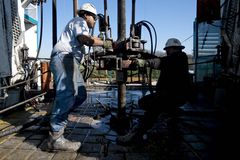