The federal election campaign is probably several months away (the mandated date is in October but the Conservatives could send us to the polls earlier if they wish). One of the issues is almost certain to be whether to raise the contribution limit for Tax-Free Savings Accounts (TFSAs), which I discussed in a column earlier this month.

But let's not stop there. The TFSA issue is just the tip of the iceberg. What we need is a wide-ranging debate on the entire retirement planning and tax-sheltered savings spectrum.

The Globe and Mail kicked off the discussion this month with a five-part editorial series called "Reforming Retirement". It's not often The Globe devotes so much editorial page space to a single issue so hopefully the politicians in Ottawa are paying attention.

The series covered a range of retirement-related matters, from TFSAs to the Canada Pension Plan. One editorial that I found especially interesting – perhaps because it echoed my own long-held views – was a call to immediately repeal the mandatory withdrawal rules related to RRIFs.

As The Globe editorial board pointed out, the requirement that a certain percentage of RRIF assets be withdrawn and taxed annually was introduced as a cash grab at a time when Ottawa was running big deficits and was searching for revenue wherever it could be found. At the time, interest rates were much higher than they are today, thus making it more feasible to generate the income needed to cover the withdrawals without incurring unreasonable risk. That is no longer the case.

You can convert all or part of an RRSP to a RRIF at any time. However, as soon as you do, the minimum withdrawal requirement kicks in. Therefore, I suggest you keep most of your money in an RRSP until the mandatory conversion age of 71. There are no minimum withdrawals from an RRSP and, unlike a RRIF, you can continue to make contributions. That said, once you turn 65 move just enough money into a RRIF to allow for a $2,000 annual withdrawal, which is eligible for the pension income credit.

RRIF assets should be conservatively invested, for obvious reasons. But with interest rates so low, this means that even a target return of 5 per cent, which is well below the minimum withdrawal rate after age 71, entails more risk than may be appropriate.

Let's look at the impact on every $100,000 worth of capital in a RRIF under the current system, assuming a 5 per cent annual return and an annual lump-sum withdrawal of the minimum amount made at year-end. 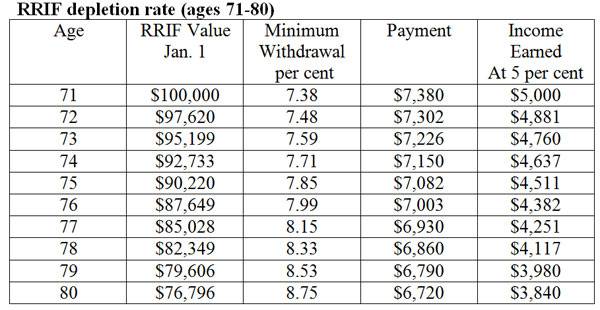 This is not a pretty picture. Even as the minimum percentage withdrawal increases, the actual amount the annuitant receives steadily declines. After 10 years between ages 71 and 80, you're receiving about 9 per cent less income than when you started. Plus, you've lost more than 23 per cent of your capital.

The situation only gets worse in subsequent years as the minimum withdrawal escalates. Look what happens between ages 81 and 90. 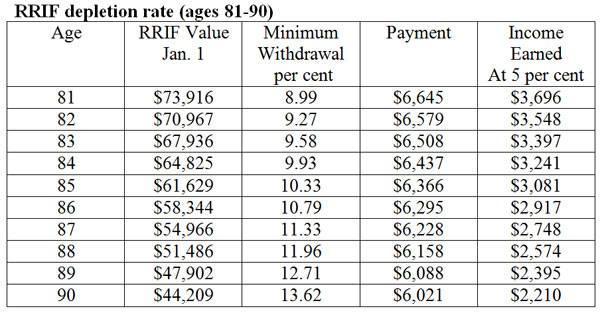 Does this make sense to anyone who is not CRA tax collector? By age 90, more than 55 per cent of the original capital is gone and the annual payments are down 18.4 per cent from where they were at 71. Even if we experienced 20 years of zero inflation, that would create a major financial problem.

And don't even ask what happens after age 90. By the time you hit 94, the payments have to come out of the RRIF at the rate of 20 per cent a year. With life expectancy steadily increasing, we risk seeing older Canadians run out of money before they die, creating a serious socio-economic problem.

The solution is very simple: abolish all mandatory RRIF withdrawals and allow people to take out the money as they need it. In the end, it will all be taxed anyway. What's the rush? There is simply no rationale for maintaining the status quo.

This is the position I have maintained for some time. In fact, I presented just such a proposal a few years ago to a Senate committee looking into our retirement planning system. Naturally, nothing happened.

Enough talk. It's time for the federal government to take action.