We are finally seeing an uptick in volatility in U.S. markets. Seasonally, it's time to get a bit concerned as most of the worst market declines have started in the third quarter. There are always things to be concerned about when investing, especially when the bull is long in the horn. There are no shortages of geopolitical risks, and no shortage of Trump tweets to prove that he's not what people hoped he could be. Continued infighting in the White House and the GOP suggests material reforms are less likely to happen.

So, what is keeping the market up? To be sure, earnings have been good for a few quarters on both top and bottom line, but financial engineering is responsible for most of the EPS growth the past five years. Nevertheless, there were some animal spirits released globally after U.S. President Trump won the election on hopes for reforms, but it's clear to us, at least, that patience is waning. Will any of this be the catalyst to ignite the next material market decline?

Reading the "tape" is not for everyone. It's a skill that is fraught with investor bias and cognitive-dissonance risks. One day the "tape" looks good, the next bad and you can easily flip-flop on your opinion increasing trading activity with no meaningful benefit. One solution to deal with the potential for hyper-noise trading is to always look at the same indicators in the same manner.

I often get asked what my favourite indicator is even though just looking at one is not enough. But if I had to pick just one, it would be market breadth. Breadth assesses the quality of the rally. You may have heard the old phrase "a rising tide lifts all boats." Think of market-breadth analysis as the flow of the tide and all the stocks in an index are the boats along for the ride.

For the traditional market cap weighted S&P 500 (SPY.N), the top 10 holdings control about 20 per cent of the index. In the equal weight S&P 500 ETF (RSP.N), the top 10 controls 2.5 per cent of the index. Since Brexit, the market-cap weighted index has outperformed the average stock by 3 per cent (17.17 per cent against 14.14 per cent). The divergence started in mid-February. Prior to that, the indexes were tracking pretty tight and the rising tide post-U.S. election was lifting most boats. Evaluating market breadth (how many stocks are participating in the rally) can tell us much about the quality of the rally. The more stocks participating, the better the rally – and the more likely it is to persist.

The chart looks at how many stocks in the S&P 500 market-cap index are above various different trendlines (averages). We look at the percentage of stocks above the 10-day (pink), 50-day (yellow) and 200-day (orange) averages. Here, we can see the slight decay in the average stock's trend over time. On each rally and subsequent correction, fewer stocks are holding above their trendlines. It's clear the largest companies are holding up the broader market because of their weight in the index. Market tops die off slowly and the timing of the tops can vary dramatically. Our analysis suggests a broader market pullback is developing as fewer stocks are holding their trends. What this does not tell us is how much a correction will be. Since 1926, the average correction of 5 per cent or more is 13.4 per cent.

We do not see scope for a recession at this point unless the Fed mishandles policy tightening, which is always possible. We think the "bigger" (20-per-cent-plus) correction would come in late 2018 or early 2019 around the midterm elections. We believe that if the GOP does poorly in the midterm election in November, 2018, there will be enough support for a Trump impeachment. That would add tremendous uncertainty and would be a much bigger catalyst. In the meantime, valuations are high and we are still being very cautious with our asset mix.

It never looks dire at the top. People tend to worry long after the top is obvious and the pain of the losses takes hold. For most people, that's somewhere in the 10-per-cent-to-20-per-cent range. It's not too surprising that the average correction is in the midpoint range of where investors feel the pain. Historically, it's usually time to start buying at that point because once that average correction has been seen, expected future returns are much better. At some point, we are going to see a 20-per-cent-plus correction, but timing it is a mug's game. Assessing the risk of a correction and when to become more cautious is not for everyone, but asset allocation is the most important consideration in one's portfolio. Far more important than what stocks to own. 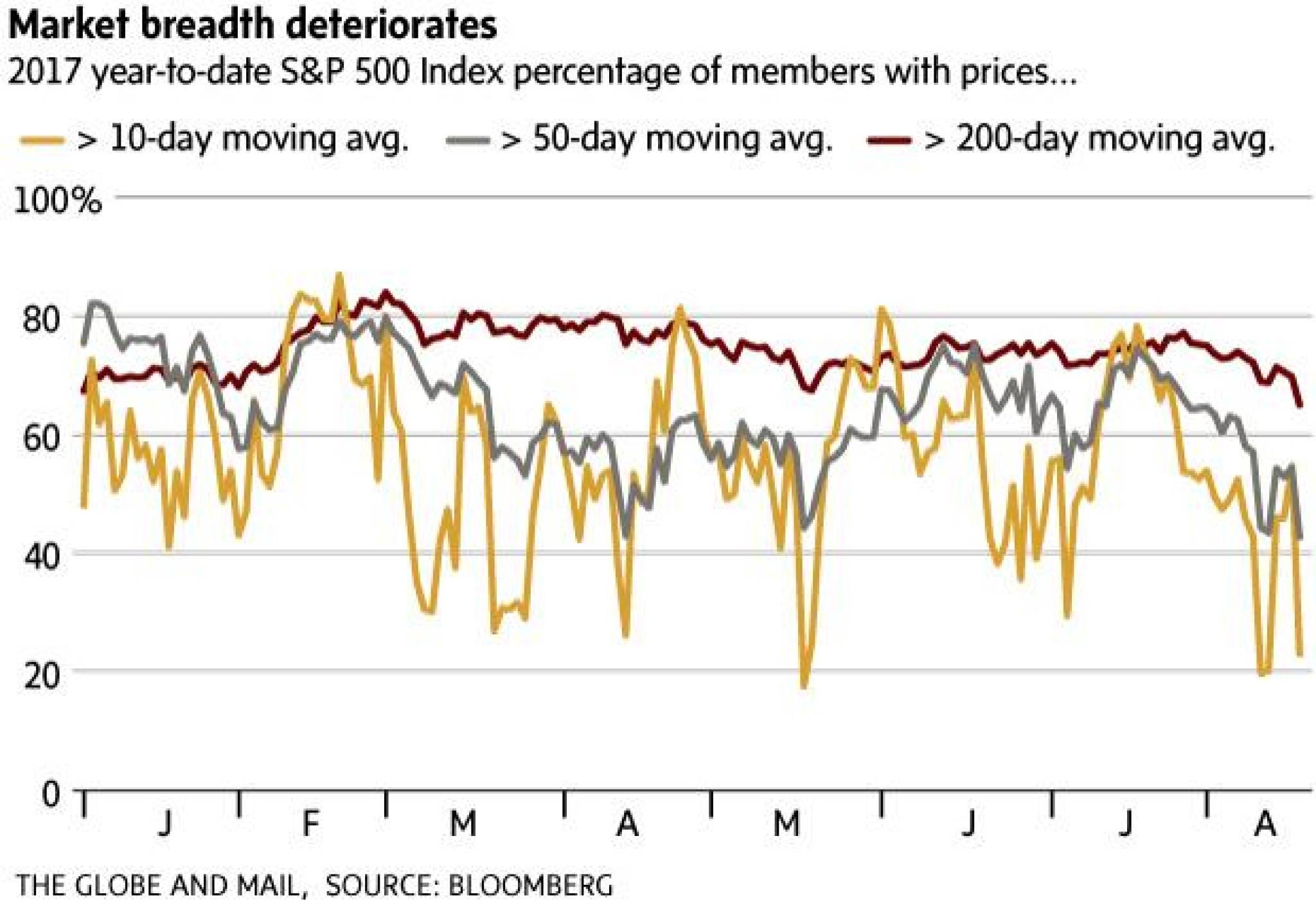 Larry Berman: Why I just bought a bunch of oil ETFs this week
May 5, 2017
Home Capital: Don’t try to catch falling knives
Subscriber content
April 28, 2017
Looking to avoid risk and get defensive? These ETFs will help
February 7, 2017
Follow us on Twitter @globeandmail Opens in a new window
Report an error Editorial code of conduct
Due to technical reasons, we have temporarily removed commenting from our articles. We hope to have this fixed soon. Thank you for your patience. If you are looking to give feedback on our new site, please send it along to feedback@globeandmail.com. If you want to write a letter to the editor, please forward to letters@globeandmail.com.
Comments