We know that Molson Coors Brewing Co. is going to sell a lot more beer, thanks to its newly closed deal to assume control of the MillerCoors joint venture, where it's been a minority investor for a nearly a decade. And that, in turn, will translate into a lot more profit.

Investors are so enthused about the potential for the combined company they've driven shares to a significant premium to the market as a whole. And the analysts who follow the company are overwhelmingly positive, suggesting there are more gains to come.

But in large part, the Molson Coors investment thesis is based on aggressive cost-cutting and efficiencies in the next few years – not on a solution to the long-term challenges facing the big brewers, who have found sales gains elusive.

No doubt, the deal is transformational when you look at the company's expected financial results.

By spending $12-billion (U.S.) to buy the 58 per cent of the venture it didn't already own, the company will boost its revenue from about $3.6-billion in 2015 to more than $11-billion in 2017, analysts estimate. (These numbers mislead, because of the effects of joint-venture accounting, but you get the sense of just how much it means to the company to claim 100 per cent of MillerCoors.)

A peak at Molson Coors' third-quarter earnings, released last week, shows the top-line challenges, however. At MillerCoors, the company's U.S. business, shipments were down 0.6 per cent year over year, while sales by distributors to retailers declined 4 per cent. Sales to distributors in Canada and Western Europe declined 3 per cent and 1.4 per cent, respectively.

Molson Coors operates almost exclusively in those geographical areas, with a limited presence in fast-growing emerging markets. And, even though it has been more than a decade since Molson Inc.'s fiasco with its Brazilian Kaiser operation, one analyst dropped that name in a recent report in discussing the company's international efforts.

In addition: Molson Coors' craft-brew offerings represent less than 10 per cent of sales, even if you include the company's Blue Moon products, which many crafty types apparently do not. (Please do not e-mail me about what constitutes a craft beer. I do not care.)

Morningstar analyst Adam Fleck is the most pessimistic of the bunch, with a two-star rating and $87 estimate of the stock's fair value (versus Tuesday's close in New York of $105.88). He observes that "beer volume has been declining in all the major developed beer markets where Molson Coors exists," and the problem may accelerate if millennials continue their apparent preference for wine, spirits and "above premium" (i.e. craft) beers.

What's the bull case, then? Synergies. To be fair, the company's track record is strong, as the MillerCoors joint venture has yielded more than $1.4-billion in cost savings since 2008, which Citigroup Global Markets Inc. analyst Wendy Nicholson notes is roughly double what was initially promised. Indeed, Molson Coors first suggested $200-million in savings in the first four years, but last week jacked that estimate up to $550-million over three years.

There's substance behind the forecast: Molson Coors can now use the entire MillerCoors brewery footprint to serve its markets, cutting transport costs. And the MillerCoors procurement function had been kept entirely separate from Molson Coors' operations, Citi's Ms. Nicholson notes, meaning, for example, that the latter had no idea what prices the former was getting on aluminum cans. Combining procurement "will allow for more competitive rate searching as [Molson Coors] will now be able to procure the best rates possible even for its Canada business."

Ms. Nicholson is okay with that. She has a $125 price target, implying roughly 18 per cent price appreciation, and a 30 per cent premium to the broader market. She sees not only a significant expansion in the company's profit margin, but also some improvement in sales volumes.

And indeed, if Molson Coors can add meaningful sales gains to what is likely going to be an impressive round of cost-cutting, the share price can be justified. But while investors' gains may indeed be heady in the next couple of years, the uncertainty about the future of mass-market beer may mean shareholders' returns will go flat soon after. 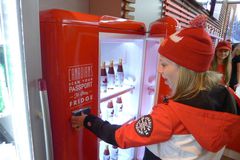