Neil Young's just-concluded four-date tour through Canada was a solo-act: just the singer on stage, surrounded by guitars, a couple of pianos and a pump organ.

Similarly, his coinciding protest against the oil sands – part of an effort to raise money and awareness for a legal challenge by First Nations opposed to oil-sands expansion – was largely seen as one voice against a multibillion-dollar energy industry that isn't likely to fade away any time soon.

But Mr. Young has like-minded allies that go well beyond the usual suspects in the environmental field, extending into the influential spheres of institutional investing.

Indeed, one of the loudest voices opposed to the oil sands is Jeremy Grantham, co-founder and chief investment strategist at Boston-based global asset manager GMO, which has $112-billion (U.S.) in client assets.

Though they don't work on or off the stage together, the rock star and strategist could easily provoke a far different risk assessment for the Canadian oil sands, a region that has long been viewed as less risky because it has none of the geopolitical risks of Africa and the Middle East.

Mr. Grantham is an environmentalist. He created the Foundation for the Protection of the Environment in 1997 and he participated in a protest against the proposed Keystone XL pipeline last year – so he has the credibility to back up his concerns on climate change.

Equally important, his criticism of the oil sands also flows from his concerns as an investor, complicated by the fact that he has expressed a long-term bullish view on resources.

He believes that the growing global population, along with rising affluence, is going to create shortages of many essential resources related to food, energy and industrial production.

When I spoke with Mr. Grantham late last year, though, he was more interested in talking about the resources to avoid. Oil sands (he calls them tar sands) topped the list.

"The tar sands is a particularly dirty and expensive form of fossil fuel," he said. "It doesn't bubble out of the ground like it does in Saudi Arabia. If we burn an appreciable chunk of your tar sands, we're toast."

He was referring to the environmental impact, but there was an investing angle here too: He argued that investors will suffer if the oil sands become "stranded assets" in the next decade or two as they suffer a series of writedowns and losses associated with environmental challenges. (According to regulatory filings for the end of September, GMO held thin slivers of Suncor Energy Inc. and Canadian Natural Resources Ltd., but had reduced its holdings considerably.)

As Mr. Grantham told Fortune last year: "Solar is getting cheaper by the minute, whereas petroleum is getting more expensive. It is only a matter of time before their expenses cross."

Neil Young stuck to the environmental impact during his tour, and of course there were all sorts of ways to ridicule his concerns: He's a rock star with a carbon footprint that is likely many times larger than the average Canadian's; and he is prone to hyperbole, comparing the oil-sands capital, Fort McMurray, to Hiroshima in 1945.

But his concerns are becoming increasingly difficult to ignore when they are supported by respected institutional investors – Mr. Grantham being near the top – who believe that the oil sands are probably doomed as long-term investments.

Investors have long seen Canadian energy stocks as bets on the price of oil and the world's thirst for it. Now, there's something else to consider, and Neil Young's fine music serves as a constant reminder. 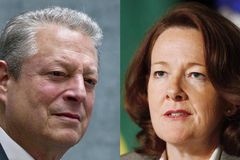