If you want to invest in our older folks, try real estate.

Demographics has emerged as a compelling investing strategy as the population ages, and focusing on the rising demand for retirement residences and long-term care facilities is a remarkably direct approach to the aging theme.

It has also been working well. Chartwell Retirement Residences, for example, is up 72 per cent over the past five years (to the end of 2016). That's significantly better than the 28-per-cent gain for the S&P/TSX composite index over the same period.

The demographics trend is sound. According to Prudential Financial, which drew on data from the United Nations for a recent white paper on this subject, the number of people 65 and over will double over the next 25 years, to more than 1.5 billion, as average lifespans rise and fertility rates decline.

In developed markets, the number of seniors surpassed the number of people who are 15 years old or younger for the first time in 2010. After 2025, seniors will outnumber everyone under the age of 20.

Canada fits right in here. According to Statistics Canada, more than 16 per cent of the population is over 65, which is greater than the 15-and-under crowd. The number of seniors is rising four-times faster than the general population.

Seniors will influence market trends, creating a number of intriguing opportunities in everything from biotechnology and pharmaceutical companies, to cruise lines and asset managers.

But while many of these opportunities may incorporate products and services for seniors, they are not necessarily specific to them – at least, not as directly as retirement residences, which are already reflecting Canada's greying ranks.

Chartwell is the biggest, based on its market capitalization. Its stock price has also outperformed its peers over the past five-year and one-year periods by a substantial margin. Although Chartwell's dividend yield of 3.8 per cent trails the others – Extendicare's yield is 4.6 per cent and Sienna's is 5.3 per cent – the company stands out for having raised its monthly payout for the past two years while the others haven't.

Expect more dividend hikes ahead as the company profits from rising demand for its residences, which are largely located in Ontario and Quebec, with a modest footprint in Alberta and British Columbia.

The company expects that the size of its market will double in the next 20 years with the rising number of Canadians over the age of 75 driving demand for an additional 600,000 suites in Canada by 2036 – with steady growth between now and then.

In its third-quarter results, released in November, Chartwell owned and managed more than 26,000 suites, which suggests plenty of opportunity for further acquisitions and development projects ahead.

But already the company is demonstrating that it can reward investors today.

As a result, annual distributions are now just 64.6 per cent of Chartwell's adjusted funds from operations. That is the lowest payout ratio in at least five years and down from more than 80 per cent as recently as 2012, which suggests that the company is in a good financial position to raise its payout.

Chartwell's relatively low dividend yield today implies that investors are confident that monthly distributions are set to rise. It looks like a sound bet: The backdrop of an aging population is a trend that is certainly not going to reverse any time soon. 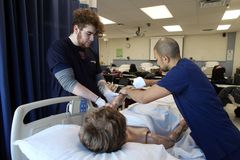