Crude oil prices have been under heavy pressure over the last few months, falling to their lowest levels in years. Recent trading action, however, suggests the slide may be over and a rebound possible.

There are a number of factors combining to suggest that crude oil may be bottoming out.

Response to news
Usually markets go up on good news and down on bad news, and when this doesn't happen, traders tend to take notice. Yesterday's big 7.1 mmbbl increase in U.S. inventories sent WTI lower but it did not break the $80.00 level, suggesting that selling may be washed out. Today's strong response to more positive PMI and production news suggests that a change in direction may be starting.

Improved supply conditions
One of the factors that had been driving crude down was the fear of a glut of supply in the marketplace, a big change from the last several years where there had been a fear of supply disruptions. It now appears that the price has reached a point where it is starting to hurt producers.

Saudi Arabia and Kuwait recently shut production at a less profitable for "environmental" reasons, while today's reports that Saudi Arabia trimmed back production last month and that Libya has called for an OPEC production cut were well received by traders. This indicates that should the price fall much further, we could see a greater response from producers reducing supply by shutting in production.

Improved demand factors
Another factor that had been dragging crude oil prices down was the fear that slowing economies in China and Europe could cut into crude oil demand. Today's flash manufacturing PMI reports from China and Germany which were a bit better than expected appears to have eased some of these fears.

U.S. dollar impact fading
Crude oil is priced in USD and much of the selloff over the last few months has been in tandem with a big rally in USD on anticipation of the end of QE3 and a more hawkish Fed. The greenback has levelled off lately, taking some of the pressure off of crude oil

Extreme pessimism
The charts for WTI and Brent crude below both show RSI indicators that are their most oversold levels in two years. Also, in an interview I recently did on crude oil, I was asked if I thought WTI could go to $60. Both of these indicators suggest extreme pessimism has gripped crude oil markets which could set the stage for a significant rebound should the factors that have driven crude down so much lately start to ease.

Low political risk concerns
There are times when political risk can be a significant component of crude oil pricing. This is not one of those times. Violence in the Middle East has not impacted supply, and Libya -- where there had been supply fears earlier this year -- has ramped up production lately.

The premium for Brent Crude over WTI crude which was up over $20.00 at one point a few years ago, it now down to less than $5.00. Any surprises that raise political risk could have a significant impact. 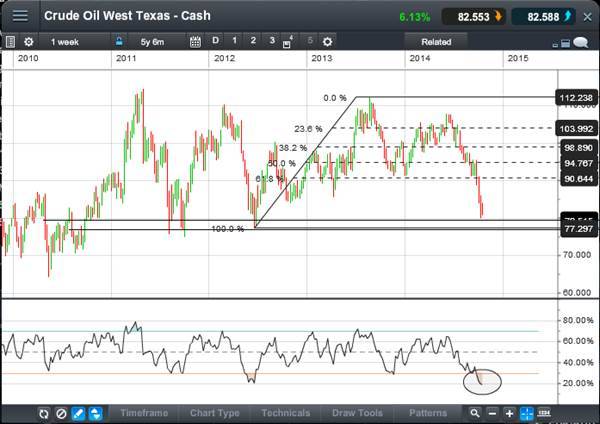 WTI crude oil has dropped dramatically in the last few weeks but has reached a zone of potential support. So far the $80.00 round number has been holding along with $77.00, the bottom of a huge trading channel that has been in place since 2011. 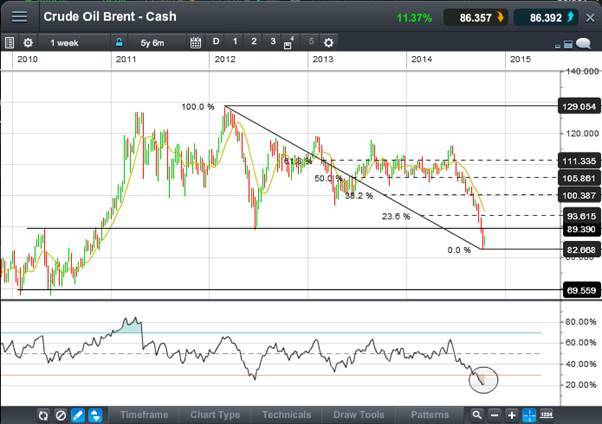