There was a long period when I equated technical analysis with astrology – a baseless distraction that only mattered to the extent that other people believed in it and acted accordingly. The realization that technicals were a way of quantifying sentiment – putting numbers to the degree of optimism or pessimism reflected in the market, if only for a short time frame – changed my mind.

Under normal circumstances, technical analysis is the final stage of my investing process. Fundamental research is used to find stocks or other assets with attractive valuations relative to their bright outlooks, and then technical analysis is implemented in an attempt to find the most profitable entry point for investment.

There are cases such as cryptocurrencies, however, with no conventional means of valuing the asset, where sentiment is more or less the only guide to future returns. In these cases, technical analysis can be extremely telling. Technical analysis is far from foolproof, and not on its own a reason to make market transactions, but in cases such as bitcoin, there's little else to go by.

The magnitude of bitcoin's 2017 September-to-December rally – the value in U.S. dollars increased more than fivefold – is such that it makes most charts of technical indicators longer than three months unintelligible.

The exception, where some information can be gathered, are moving average trend lines, which are depicted in the accompanying chart.

For active traders, trend lines are viewed as a source of both support and resistance for asset prices. When a stock is trading above its 50-day moving average (50DMA) and the price is falling, for instance, the decline will often pause at the trend line and attempt to rally.

The same is true in reverse. A stock trading below its 50-day line and moving higher will often bounce off the trend line, head temporarily lower, and attempt to breach the trend again. Experienced traders will say "price has memory" to describe the influence of trend lines.

The chart shows that the 50DMA provided no support for bitcoin whatsoever – the price knifed through it on the way lower without pause. This is a sign of significant downside momentum.

Cryptocurrencies are a new phenomenon and, no matter what anyone says publicly, bullish or bearish, everybody is to a significant extent feeling around in the dark where "fair value" is concerned. Technical analysis, by estimating sentiment levels surrounding these assets, can assist investors and speculators in judging the immediate future for these asset prices. 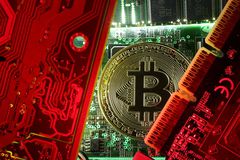 Regulatory fears hammer bitcoin below $10,000, half its peak value
January 17, 2018
This is how cryptocurrency craze may come crashing to a bitter end
Subscriber content
January 16, 2018