The S&P/TSX Composite enjoyed a welcome 3.2 per cent bounce in the five trading sessions ending Thursday. According to my favoured technical measure, Relative Strength Index (RSI), the domestic equity benchmark is in the neutral range at 45, closer to the buy signal of 30 than the sell signal of 70.

The number of technically attractive stocks in the index has been slashed by almost three-quarters, which is good news for investors but not so good for this technical update. The vast majority of the stocks left on the oversold table are in the energy sector, and I still don't trust them because of ongoing weakness in the crude price.

Teck Resources Ltd. is the focus chart this week pretty much by default. The stock was insanely oversold but remains a high-risk proposition. China recently announced restrictions in coal imports, which will hurt the company's revenue and profit growth. But, copper and zinc prices have been much more stable and Teck is also a major producer of both.

In general, the RSI buy signal has worked for traders of Teck stock but there is a big exception. In early 2013 the stock got oversold and stayed there while the price almost got cut in half. After that, buy signals in June and December of 2013 and March of 2014 worked OK, but traders needed to have a quick trigger finger because the rally didn't last. I can't recommend trading Teck at this point, but further fundamental research might make it more interesting.

There are a few overbought, technically vulnerable stocks in the market for the first time in a few weeks. Investors should hold off on buying Canadian Apartment REIT and Calloway REIT until some of the market froth burns off. Retail stocks Hudson's Bay Co. and Canadian Tire Corp are also overbought, but not by much.

This isn't the most exciting weekly technical report I've written – there are no glaring buying opportunities. But taken as a whole, I think the numbers do tell an important story. Most stocks in the benchmark have already bounced from oversold levels and it's going to take more than technicals for them to continue to rally.

As always, investors should complete fundamental analysis before buying any stock. Technical measures are useful, but not sufficient. 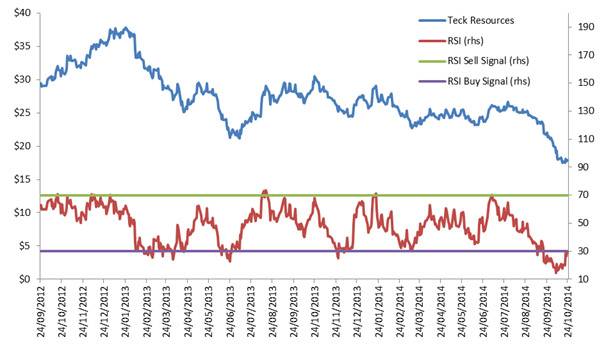