The S&P/TSX composite fell 1.1 per cent in the week ending with Thursday's close but there's still only one stock – Concordia Healthcare Corp., the same one as last week – in the officially oversold category according to Relative Strength Index. The benchmark's current RSI reading of 55 keeps it in roughly neutral territory between the oversold, buy signal of 30 and the overbought, sell signal of 70.

Choosing a focus stock wasn't easy this week because I featured Concordia last Friday. Dorel Industries is the second most oversold TSX stock but the company's forward price earnings ratio is the same as trailing PE, which means no earnings growth is expected in the next 12 months. The same is true of Canadian Tire Corp. which is also close to oversold levels.

I picked Newalta Corp. even though the RSI is 35 – five points away from oversold. The forward PE ratio is less than half of the trailing PE, which means considerable year-over-year earnings growth is expected. Analysts are extremely confident in the stock – all nine covering the company rate it a buy. The current average target price implies an 87-per-cent return in the coming year.

RSI has worked well in identifying profitable entry points for Newalta stock in the past two years, but in some recent cases the rallies didn't last long.

"Almost oversold" readings similar to now led to sizable rallies in November, 2013 and January, 2014, particularly in the latter case where the stock rallied 39 per cent to September 14th. After that, however, the post-sell signal rallies were sharp but were followed by the stock rolling over and heading lower. This was true in October and December, 2014 and also in August, 2015.

Buying the stock here (after the required fundamental research, as always) is not without risk – it has been making lower lows for over a year. But, the current 5.8-per-cent indicated dividend yield, if sustainable, should help protect from further significant downside.

The list of overbought, technically vulnerable TSX stocks (not shown) is small at three stocks. Canadian Oil Sands Ltd. was boosted by Suncor's takeout bid and it's the most overbought stock in the index. Just Energy Group Inc. and Franco-Nevada Corp. complete the list. 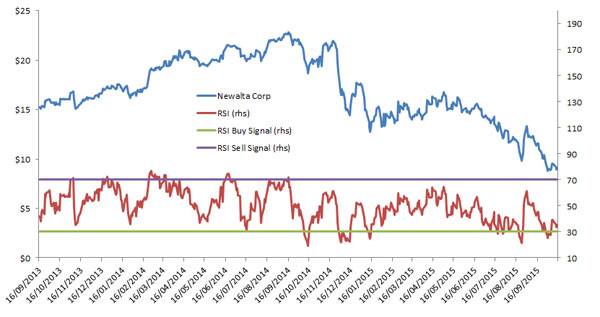