The S&P/TSX Composite dropped -0.7 per cent for the five trading days ending with Thursday's close and is now lower by 6.4 per cent for the year. In terms of technical analysis, the benchmark as a whole remains in neutral territory according to my favoured short-term technical measuring stick, Relative Strength Index (RSI). The current RSI reading of 44 is safely between the buy signal of 30 and the sell signal of 70.

I chose Inter Pipeline as the focus stock this week for discussion, not recommendation purposes. Like many domestic stocks, RSI previously worked great for finding profitably entry points but has been very little use in 2015.

RSI buy signals in June 2013 and December 2013 were highly effective as stock price rallies of 23 per cent and 61 per cent followed respectively. But after the oil price began heading lower in September 2014, profitable buy signals were more or less non-existent. Sub-30 buy signals only marked temporary reprieves in selling pressure. InterPipeline declined 40 per cent between September 15, 2014 and Thursday's close.

J.C. Parets is a technically-oriented investor who manages the All-Star Charts website. Mr. Parets constantly warns that technically analysis should not be trusted for stocks trading below their 200 day moving average. The InterPipeline supports this theory. The buy signals stopped being effective almost exactly when the stock headed below its 200 day moving average in November of 2014.

There may be reasons to buy InterPipeline, but technical analysis does not provide them. The indicated dividend remains significant at 7.1 per cent but I'm not the first one to notice that. Despite the desperation for yield in the current market, clearly most institutional investors have been content taking a pass on InterPipeline so far. For what it's worth, the average analyst target price implies a 39 per cent 12 month return on the stock.

It's not going to be easy, but I'm going to have to start finding oversold Canadian stocks that are both oversold by RSI and trading above their 200 day moving averages. This may not be easy.

As always, investors should not make any market transactions without considerable fundamental analysis. Technicals are helpful but not sufficient reason to buy or sell market assets on their own. 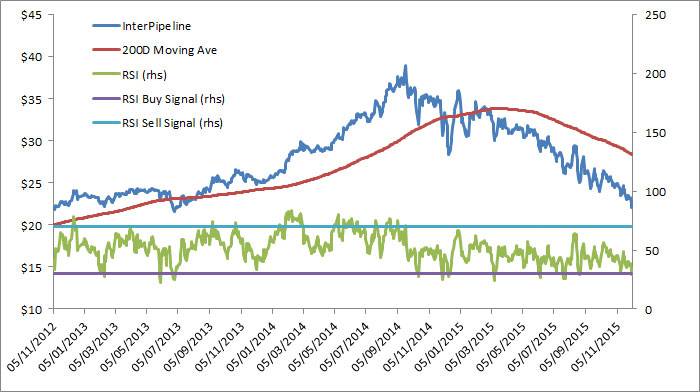