The S&P/TSX Composite climbed 1.6 per cent for the week ending with Thursday's close and is now higher by 7.8 per cent year to date. According to Relative Strength Index (RSI), however, my preferred short term technical indicator, the benchmark is overbought and vulnerable to a pullback.

The Composite's RSI reading is 69.6, and rounding up the number means the benchmark has officially hit the overbought sell signal of 70. There are currently zero index members trading with an RSI below the buy signal of 30, and a whopping 32 index stocks trading above 70. RSI results change quickly but right now, this market is frothy.

The S&P/TSX Composite itself is the focus chart this week as we try and sort out how seriously to take the RSI sell signal. The benchmark has generated seven RSI sell signals in the past two years and most often, a short term pullback has occurred.

In early 2014, the index generated a series of sell signals that were followed by very small pullbacks, merely pauses in strong, rising market. But beginning in August 2014, RSI sell signals were followed by painfully large sell-offs. A sell signal on August 26, 2014 kicked off an 11.2 per cent decline to October 15. Another RSI warning on April 13, 2015 was followed by a miserable four month period where falling oil prices sent the benchmark down fifteen per cent.

More recently, an RSI sell signal in early March of 2016 led to a smaller 0.3 per cent pullback in the index.

The track record of RSI sell signals has been very good over the past 24 months, so investors have a right to be a bit nervous that the benchmark has reached oversold territory. We can hope, however, that the bulk of the damage in commodity markets is behind us, and that any decline from here will be modest.

The list of overbought, technically vulnerable stocks in the S&P/TSX Composite Index is too large to fit on this page, so I had to edit them down by most widely held companies. Precious metals stocks are well represented as Silver Standard Resources and First Majestic Silver Corp are among the most overbought index members. Banks are also on the list. Canadian Western Bank is the second most overbought stock, and Laurentian Bank of Canada is not far behind.

The usual warnings apply. Technical analysis tools like RSI have proven extremely useful but they are no substitute for fundamental research. Traders and investors should complete both fundamental and technical research before making any market transaction. 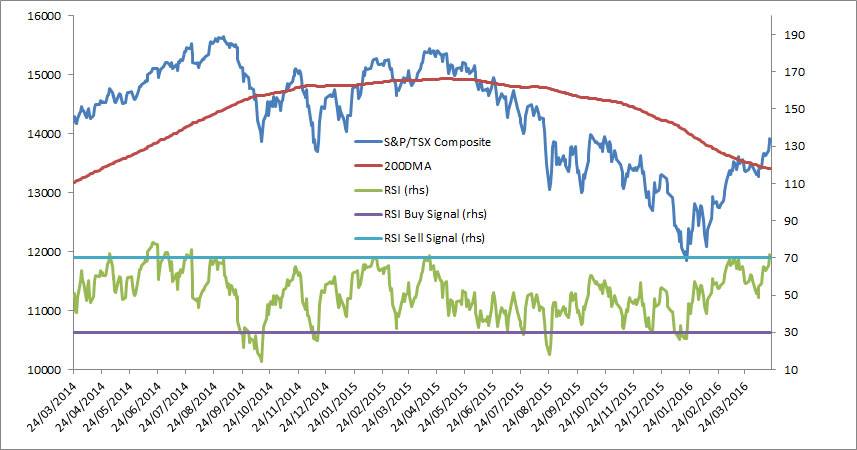