The S&P/TSX Composite climbed 1.0 per cent for the trading week ending with Thursday's close, and its current Relative Strength Index (RSI) mark of 47 puts it in neutral technical territory, although slightly closer to the RSI buy signal of 30 than the overbought sell signal of 70.

There are nine oversold, technically attractive benchmark stocks this week, according to RSI.

I picked Shopify Inc., an overbought and technically vulnerable stock by RSI this week. Shopify's price has jumped 450 per cent in the past two years so clearly there hasn't been any bad time to buy it. In this case, we're using RSI to see if some buying opportunities have been more lucrative than others.

Shopify has performed so well it was impossible to avoid obscuring the blue stock price line in the early segment of the chart. (The RSI reading is the green line, the buy and sell targets are purple and teal respectively).

There have been only two RSI buy signals for Shopify – May of 2016 and October 2017 -and both worked extremely well. This is not a surprise given the consistently strong upward trajectory of the price.

RSI sell signals, like the one Shopify's showing now, have been reasonably effective in providing warning signs although in many cases the price corrections have been small and quick. A sell signal in August 2016 predicted a two dollar drop directly afterwards.

The stock was oversold for almost the entire time between February and May 2017 while the price continued its rally. This is the time frame when sell signals were counterproductive although a significant sell-off did occur after the final sell signal in May.

A September 2017 sell signal provided an important warning for Shopify stock holders as the price dropped 21 per cent in the following month. Notable but short-lived price corrections followed sell signals on January 25 and February 20 2018.

As always, fundamentals trump technicals over the longer term and investors should complete fundamental research before making any market transaction. That said, from a technical perspective, it looks like the main lesson we get from this week's chart is to not buy Shopify when it's overbought.

There are 11 S&P/TSX Composite stocks joining Shopify on the overbought list this week, led by Stars Group Inc. 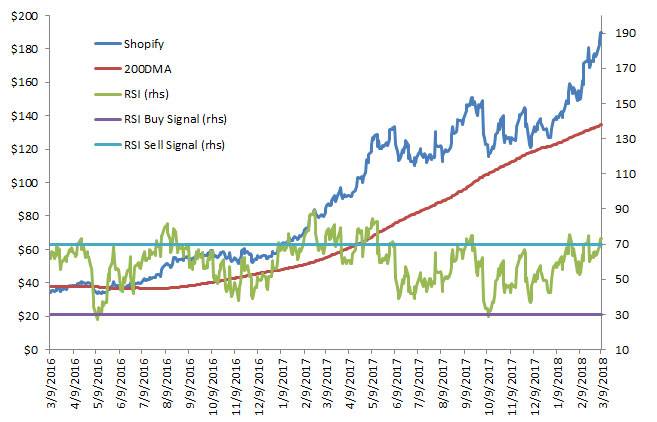