I've never seen anything like this; commodity markets, bond markets and currency markets are all closely following the same trend – consensus economist estimates for 2015 global gross domestic product growth. At this point, I can't see anything to rival world GDP estimates as the single most important chart in the world, and particularly for Canadian investors.

Exhibit A is a comparison of West Texas Intermediate crude prices and the consensus global GDP forecast. The relationship has been incredibly close for the past 10 months with only a brief six-week divergence ended in mid-March.

There is a bit of a "chicken and egg" problem in analyzing the chart – it's not easy to decide which line leads the other. It does appear, however, that the sharp jump in economic growth expectations at the end of the first quarter of 2015 did lead the recent rally in oil prices.

The domestic currency earns its petroloonie nickname in the second chart while reinforcing the cyclical nature of the Canadian economy. The value of the Canadian dollar tracks the consensus world GDP forecast in much the same way as crude prices. It makes perfect sense for the loonie to track global growth in light of Canada's extensive commodity exports to the developing world. 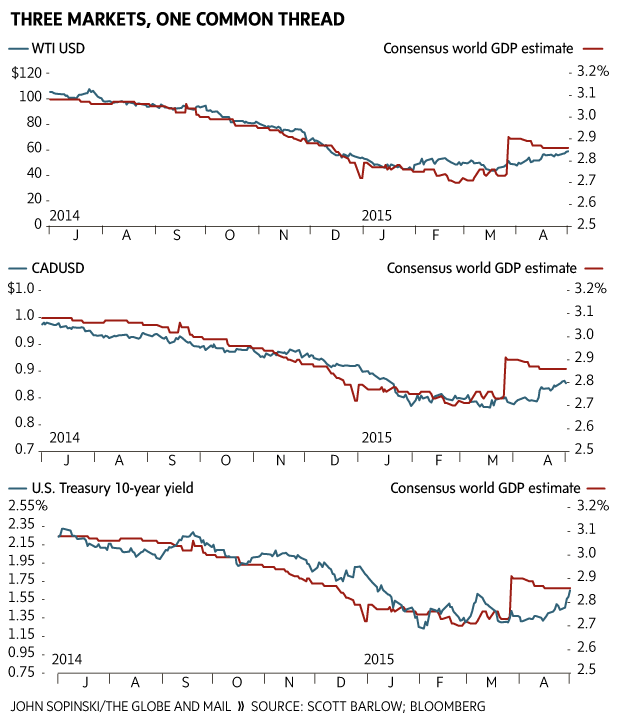 The third chart, which plots the connection between growth expectations and 10-year U.S. Treasury yield, was the biggest surprise. The correlation between the two lines isn't quite as high as the crude price in chart one, but it's still there. The surprise in this case, for me at least, was that with a U.S. Federal Reserve so active in manipulating monetary policy through the bond market (particularly through quantitative easing in the seven to 10 year section of the yield curve), that there would be sensitivity to much of anything economic, never mind the GDP forecast for the entire planet.

The common thread in all these charts is the U.S. dollar. Oil is priced in greenbacks as is (usually) the loonie. U.S. interest rates are tied to fluctuations in the value of the dollar in a number of ways, most notably foreign investment. When the U.S. economic forecast is brighter relative to the rest of the world, non-U.S. investors buy Treasuries with the expectation of benefiting from currency appreciation against their local currency. In addition, if U.S. bond yields are higher than another major economy – as they are relative to negative yielding German right now – foreign investment flows often move into U.S. issues, and push the dollar value higher.

The main takeaway is this: Any investors concerned about oil prices, the loonie's value versus the U.S. dollar, or interest rates (that likely includes all investors), should follow changes in global growth forecasts closely.