"I am fed up with Enbridge," one disgruntled reader wrote last week. "I know we have anti-pipeline governments but can you explain the stock's performance this year?"

It wasn't the first unhappy e-mail about Enbridge that I have received. Many readers have wondered why what used to be such a dependable stock has fallen so quickly. I share their concern; I own a several hundred shares of the stock myself.

The shares opened the year in Toronto at $57.70; they closed on Friday at $44.86 for a loss of 22 per cent thus far in 2017. For a stock that has been on a steady climb for every since we first recommended it in the Internet Wealth Builder newsletter in 1999 at $8 (split-adjusted), this comes as a real shock.

What has gone wrong? The stock started its slide around the time the deal closed for the purchase of Spectra Energy in February. Back then, the merger was touted as marking the creation of a global energy leader and the largest energy infrastructure company in North America with an enterprise value of about $166-billion.

But investors looked beyond that and became concerned about several issues. One was the stock dilution that flowed from the deal. The weighed average of common shares increased to over 1.6 billion in the third quarter of this year, up from 922 million in the same period of 2016. Another worry was the assumption of Spectra's development portfolio, which may pay off down the road but which saddles the company with a hefty capital expense budget.

Yet another concern is the company's long-term debt, which has almost doubled from $27.3-billion in the third quarter of 2016 (prior to the closure of the Spectra deal) to just over $49-billion as of the end of September this year. Enbridge has said that protecting its investment-grade credit rating is a top priority but one of the major rating agencies, Moody's, has a negative outlook on the company and has warned it could be downgraded.

Further fuelling investor concern is the fact the company keeps missing analysts' estimates. Available cash flow from operations (ACCFO) in the third quarter was $1.3-billion (82 per share). In the pre-merger third quarter of 2016 it was $852-million (92 cents per share). That's a drop of almost 11 per cent on a per share basis. For the first nine months of the fiscal year, ACCFO was $2.61 per share compared to $3.16 in pre-merger 2016.

It didn't help matters that the company dropped its guidance for future dividend increases from its third-quarter report. Ever since the Spectra deal was announced, Enbridge management has been forecasting annual dividend hikes of between 10 per cent and 12 per cent annually between until at least 2024. Now the company has suddenly gone silent about this.

Dividends are one of the stock's greatest attractions and in recent years they have been increasing at an impressive rate. The rate was boosted 33 per cent to $1.86 per share annually in 2015. That was followed with a 14-per-cent increase at the start of 2016, a 10-per-cent hike at the beginning of 2017, and a 4.6-per-cent bump in May. The current level is 61 cents per quarter ($2.44 per year) for a yield of 5.4 per cent at the closing price on Friday.

That yield makes it difficult to abandon the stock at this stage. Enbridge is clearly having problems absorbing the Spectra deal and funding may be an issue for the next few years. That may slow the growth in future dividends and perhaps even result in a credit downgrade.

At its core, this is a sound company but one that appears to be temporarily overextended. This will likely keep the stock under downward pressure for a time. But the high yield should provide a floor at somewhere around the current price as it seems highly unlikely at this stage that a dividend cut is in the works.

Analysts remain generally positive about the stock. In a recent report, Robert Catellier and Ian Woodward of CIBC said they see "substantial intrinsic value and continue to recommend that long-term investors own the shares." They maintained their "outperform" rating on the stock although they lowered their target price by $2 to $67 per share.

My advice at this point is to hold your positions and enjoy the healthy yield. It will likely take a while for the share price to recover but you are receiving excellent cash flow while you wait.

Gordon Pape is Editor and Publisher of the Internet Wealth Builder and Income Investor newsletters. For more information and details on how to subscribe, go to www.buildingwealth.ca. Follow Gordon Pape on Twitter at twitter.com/GPUpdates and on Facebook at www.facebook.com/GordonPapeMoney

BMO sees ‘once in a multi-year buying opportunity’ for Enbridge
Subscriber content
November 17, 2017 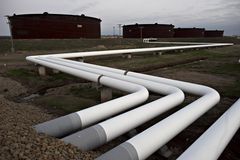 Why analysts are still bullish on Enbridge
Subscriber content
November 7, 2017 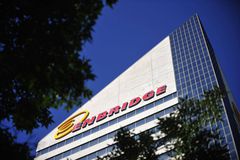 Why I'm not throwing in the towel on Enbridge shares - yet
Subscriber content
November 3, 2017