Analysts are not impressed with Bombardier Inc.'s disclosure this morning that the C Series aircraft won't be in service until the second half of 2015.

While many on the Street expected there would be a delay for the in-service date, initially set for September 2014, they didn't think it would be pushed back this severely. There are concerns now that Bombardier's Aerospace division will face a slower pace of orders and budget increases, putting more strain on the company's cash resources.

Bombardier said the entry in service date for the C Series 100 aircraft is now the second half of 2015, and for the larger C Series 300 about six months later.

Stonecap Securities analyst C. Scott Rattee downgraded his rating to "sector perform" from "outperform" and cut his price target to $5.25 (Canadian) from $5.75.

"We are surprised at both the size of the implied entry in service window (6 months) and the length of the delay, which could result in the C Series 100 being two years late based on current management guidance," Mr. Rattee said in a research note.

"In 2014 we anticipate incremental development costs for the C Series program to continue to impact Bombardier Aerospace EBIT margin performance. We have reduced our 2014 EBIT margin forecast to 4.8 per cent, from 5.4 per cent prior," Mr. Rattee said.

"While we expect an increase in bizjet deliveries to support 2014 Bombardier Aerospace margin expansion, this is likely to be largely offset by incremental C Series development costs over the coming year. Learjet 85 EIS delays are also expected to negatively impact Aerospace margins in 2014. As a result, we see 2014 as another 'work in progress' year in the Aerospace division, which is the company's key growth driver," he added.

Cormark Securities today also downgraded its rating on the stock to "market perform" from "buy" while slicing its price target to $4.75 from $6.50.

The average analyst target is now $5.50, according to the latest Bloomberg data. Shares are down 8 per cent in late afternoon trading and trading near an intraday low of $4.14.

Bombardier did have some good news to report today, announcing a firm order for 16 C Series 300 aircraft to be flown by Saudi Gulf Airlines, a new Saudi-based national carrier. Including options for 10 additional aircraft, the order could be valued at nearly $2-billion.

New Flyer makes buses for many international clients and the weaker domestic currency will give a boost to revenues that come from abroad.

New Flyer also released fourth-quarter orders and backlog data this week. "Deliveries were particularly strong, exceeding our expectations by 7 per cent. However, order activity was weaker than anticipated, and the resulting backlog was sequentially much lower than we expected, although we note that orders can be highly volatile," Mr. Tyerman commented.

"Management reiterated that the backlog supports its average line entry rate of 48 bus equivalent units per week and that 2014 margins will be lower than those in 2013, all unchanged from the previous outlook. Accordingly, our view is unchanged by the disappointing orders or strong deliveries," he said.

Analysts are reacting favourably so far to Magna International Inc.'s annual outlook released on Wednesday, which included plans to take on more debt and possibly redeploy that cash towards share buybacks, dividend payouts and acquisitions.

Magna said it expects to increase leverage to a still-conservative but solid level in the next two years, resulting in the ability to redeploy $1.5-billion to $2.5-billion in cash.

"We calculate that Magna's guidance for 2014 implies earnings of $7.59-7.97 per share, modestly stronger than our previous earnings estimate of $7.59 per share and the mean estimate of $7.62 per share," commented BMO Nesbitt Burns analyst Peter Sklar.

"Our thesis continues to be that Magna will continue to improve its multiple relative to the other major auto parts companies as a result of its continued turnaround of European operations and noticeable improvement in corporate governance, which we do not believe is fully reflected in the stock price following many years of questionable governance practices. We believe that the announced recapitalization of the balance sheet, which will result in a more efficient capital structure, is consistent with Magna's improved corporate governance," Mr. Sklar added.

He raised his price target to $98 (U.S.) from $92 while reiterating an "outperform" rating.

Canaccord analyst David Tyerman nudged his price target up more gently, to $92 (U.S.) from $91. He maintained a "hold" rating and predicted that Magna most likely will spend the extra cash on share buybacks.

"MGA remains on track for low single-digit sales growth and moderate margin expansion for the next couple of years. We expect this, plus share buy backs from free cash and use of MGA's excess financial resources to produce very good 17 per cent annual EPS growth from 2013-15," Mr. Tyerman said.

"MGA's valuation remains on the high side, but we think it can remain there given positive industry and company dynamics," he added.

The record grain crop of 2013 had North American farmers buying more bins to keep the crop dry while waiting for trains to take it to the elevators. Ag Growth International Inc., which makes grain storage and handling equipment, enjoyed a rush in sales that is expected to continue this year.

"We believe that international opportunities will continue driving … growth as grain storage is a low-hanging fruit for developing countries for improving the yield," said Mr. Bout, who raised his price target to $48 (Canadian) from $42. "Our initial 2015 EBITDA estimate is $87.52-million, with an assumption that most of the growth will come from overseas."

Ag Growth recently made a large delivery to Ukraine, and has opportunities in Russia, Kazakhstan and Latin and South America, Mr. Bout said. The Brazilian government is making low-interest-rate loans to companies that build storage facilities for grain, which is rising in production.

Since the beginning of the fall harvest in North America (Sept. 1), Ag Growth shares have risen by 28 per cent.

Mr. Bout maintained a rating of "sector perform." The average target price of analysts is $46.64.

Element, a leasing company that provides equipment financing services, has an objective of growing its overall transportation equipment portfolio to $8-billion to $10-billion by the end of 2016, without acquisitions.

"Rail is expected to be a major contributor to that growth, and could account for $4-billion to $5-billion of assets by end of 2016," said Mr. Holden.

He maintained his "sector outperformer" rating and $17.50 (Canadian) price target. The average target is $17.28.

Desjardins Securities hiked its price target on Canadian Western Bank to $43.50 (Canadian) from $38 and maintained a "buy" rating.

CIBC World Markets raised its price target on Ag Growth International to $48 (Canadian) from $42 and maintained a "sector performer" rating.

JPMorgan upgraded Brookfield Properties to "neutral" from "underweight" with a price target of $19 (U.S.).

RBC Dominion Resources raised its price target on Silver Standard Resources to $9 (U.S.) from $6.50 and maintained a "sector perform" rating.

CIBC World Markets raised its price target on Methanex to $46 (U.S.) from $40 and maintained a "sector underperformer" rating.

Oppenheimer downgraded Best Buy to "perform" from "outperform" and dropped its price target to $30 (U.S.) from $50.

Canaccord Genuity downgraded Nu Skin Enterprises to "hold' from "buy" and cut its price target to $104 (U.S.) from $140.

Stifel Nicolaus downgraded Norfolk Southern to "hold" from "buy" and removed its prior price target of $94 (U.S.).

Goldman Sachs downgraded Equifax to "neutral" from "buy" with a price target of $66 (U.S.).

Credit Suisse downgraded Kroger to "neutral" from "outperform" and cut its price target to $39 (U.S.) from $48. 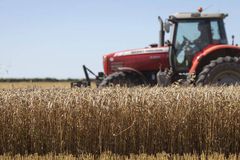