Professional and private investors continue to pile in to energy investments in seeming defiance of the laws of supply and demand. Hedge funds have increased bullish futures bets on the crude price by 25 per cent this year and Bloomberg calculates that investors have allocated more than $8-billion (U.S.) into exchange-traded funds tracking equities in the energy sector since July, 2014.

Optimism in the oil patch appears to be driven by two factors: one, expectations for declining U.S. production as more oil rigs are idled and two, a futures curve that continues to point to higher prices in the year ahead. 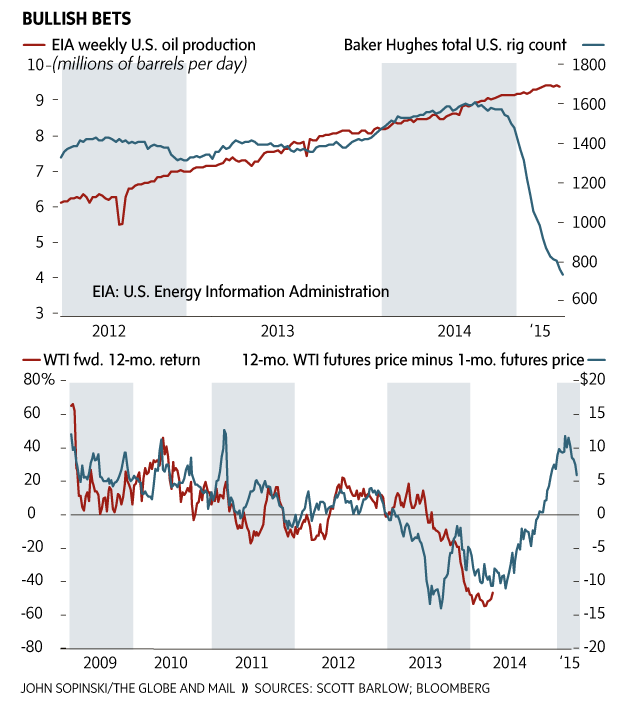 The top chart compares weekly U.S. oil production with the widely followed Baker Hughes U.S. Crude Oil Rotary Rig Count index. The amazing 53-per-cent surge in U.S. oil production during the past three years is evident. The rig count climbed 19 per cent between April, 2012, and October, 2014, a number that struck me as surprisingly small – but has since collapsed and is now 54 per cent lower from the highs.

Weekly U.S. oil production dropped 20,000 barrels a day for the week ended April 10. The decline was small in percentage terms, but the oil price rallied significantly last week when these results were released. Bullish investors believed they were seeing the first sign that the sharply lower rig count was finally showing up in production statistics, and a new trend would see the North American oil glut relieved by steadily declining supply.

The lower chart, and the second big reason for investor optimism, shows the bullish oil price outlook embedded in the futures curve. The blue line shows the steepness of the WTI futures curve measured as the difference between the 12-month futures price minus the one-month futures price. A rising line indicates futures investors are more optimistic that oil price will be higher in the next year. The red line on the chart shows the forward 12-month performance of the oil commodity price (essentially, the one-year percentage return an investor would have received if they'd bought a barrel of oil that day).

As an example, the first two data points on the chart are from April 17, 2009. At the time, the difference between the 12-month futures price and the one-month price was $12.02 a barrel. In the 12 months after that point, the spot commodity price rose 65.4 per cent.

It's not an exact science, but eyeballing the chart suggests the current shape of the oil futures curve forecasts a rise between 10 and 20 per cent for the commodity price in the next year based on the past five years of market history. Importantly, however, the futures curve is less bullish than a few weeks ago. At the end of February, 2015, the futures market suggested a commodity price improvement in the 30 to 40 per cent range.

The future course of these charts, I think, will answer the most important questions for energy investors in the coming weeks. Will the cratering rig count result in lower U.S. oil production and the end of the rally-squashing oversupply situation? And secondly, how much optimism is justified by the futures market?

Scott Barlow, Globe Investor's in-house market strategist, writes exclusively for our subscribers at ROB Insight and Inside the Market online.