For investors, it's not easy to value gold in a modern context. The most famous economist of all time, John Maynard Keynes, described it as a "barbarous relic," best left to history classes. But there remains a small but vocal minority who believe the largely useless shiny metal should be reinstituted as the basis of all monetary policy.

There is no confusion about the recent strength in precious-metals prices, as bullion prices have jumped 10 per cent since Dec. 21, 2016. There is also little confusion as to why the rally occurred – the gold price is moving in exactly the opposite direction as U.S. real bond yields. In addition, a hedge fund manager owning one of the strongest long-term performance track records ever, Stanley Druckenmiller, has again taken a significant position in bullion.

The first chart below underscores the extent to which the gold price has been moving directly opposite to U.S. inflation-adjusted bond yields. The grey line represents yield on the 10-year Treasury Inflation Protected Securities (TIPs), which indicates the real yield – the nominal yield on the 10-year Treasury bond minus the rate of inflation. Note that the TIPs yield is plotted inversely to better show the trend.

The pattern is clear: when real yields go down, gold goes up, and when real yields climb, gold falls. Anomalies when the lines diverge, as between February and March, 2014, when the bullion price remained elevated despite high real yields, have been short lived.

The high negative correlation for the chart lines results primarily from gold's role as the 'anti-currency', historically moving in the opposite direction of the U.S. dollar and other major global currencies. Real yields have been affecting the U.S. dollar, and this is reflected also in gold.

Mr. Druckenmiller, whose primary hedge fund generated annual returns of 30 per cent until he refunded assets to outside shareholders in 2010, has bought gold explicitly to benefit from this anti-currency effect, according to a Bloomberg report. "I wanted to own some currency and no country wants its currency to strengthen," Mr. Druckenmiller said. "Gold was down a lot, so I bought it." The purchases were made in late December and in January; he did not disclose exactly how much he bought.

The 'no country wants its currency to strengthen' phrase is telling. Mr. Druckenmiller is betting that in an increasingly protectionist global trade environment, most countries will be looking to keep their currencies weak to maintain export levels. The Bank of Canada and U.S. President Donald Trump have both recently noted their desire to keep the value of the currencies from strengthening, and the gold price should benefit as a result.

The second chart underscores the inverse relationship between the U.S dollar and gold prices. The rally in gold that began on Dec. 21 coincided almost perfectly with a 3.3-per-cent decline in the U.S. trade-weighted dollar index.

Based on consensus economist estimates for nominal 10-year bond yields and inflation, the gold price appears set for small gains for the remainder of 2017. The current 10-year TIPs yield is 0.39 per cent and the gold price is about $1,235 (U.S.). The forecast for the 10-year nominal bond yield at the end of 2017 is 2.77 per cent, and the estimate for inflation is 2.4 per cent. This provides an estimate of 0.37 per cent for the year-end 10-year TIPs yield, only marginally lower than the present. Since the bullion price moves in the opposite direction of TIPs yields, this suggests a small move higher in gold.

If, as often happens, the consensus estimates prove incorrect, gold investors can be optimistic if inflation estimates move higher more quickly than nominal bond yields or, based on the second chart, the U.S. dollar is weaker than expected. 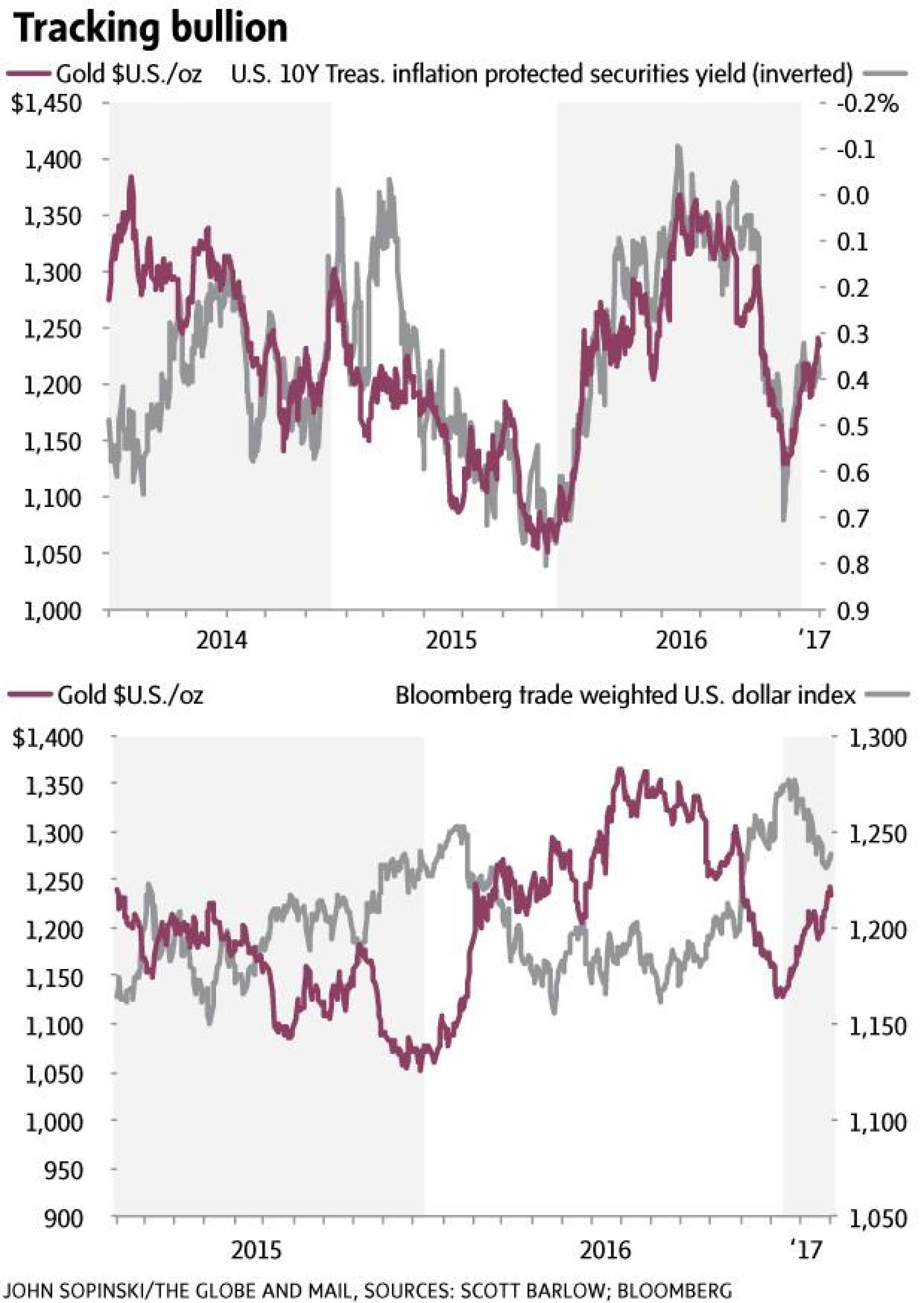