Bloodbath! Carnage! Um, how about "mild correction" instead?

Make no mistake: Stocks will one day face a painful reckoning after a decade of easy money. But as the vigorous rebound by the Dow Jones industrial average on Tuesday demonstrated, right now is not that fateful day.

A booming global economy, strong growth in corporate earnings and falling unemployment provide plenty of support for the glass-is-half-full crowd. Despite the panicky headlines in recent days, there is no sign a recession is on the horizon, and corporate news has been largely benign.

All of that argues against seeing the tumult of the past several days as a sign of apocalypse tomorrow. Instead, view it as an indication that the market's long, happy stretch of euphoria is over. Complacency served people well when stocks were climbing relentlessly higher. But it could easily lead investors astray over the next couple of years.

One danger comes from the possibility that bond yields may surge. Since the financial crisis, bond yields have hovered around historic lows, making stocks the only investment option worth considering. But rates are now moving up and bonds are beginning to merit renewed consideration.

Rising rates mean investors are no longer guaranteed to lose purchasing power when they put money into a fixed-income investment. For people who crave stability, bonds are once again a decent alternative. This means fresh competition for stocks, which are trading at unusually expensive valuations, especially in the United States.

The catalyst for last Friday's sell-off wasn't any dire economic news, but an upbeat U.S. payrolls report on Friday that showed wage growth was stronger than expected. Rising wages could lead to an outburst of inflation, which would then be reflected in higher bond yields. Bigger paycheques could also hurt corporate profits by raising the cost of labour.

According to some observers, those trends suggest it is time to start moving out of stocks. It's a reasonable position.

But this story has another side. For all the worry about rising inflation forcing rates higher, there is still little evidence of any widespread increase in prices. In fact, inflation and interest rates have remained stubbornly low for years in every developed country.

Some economists think rates have been restrained by the aging populations in industrialized economies. The share of people over 65 shot from 8 per cent in 1950 to almost 20 per cent in 2015, and is projected to keep rising, according to a recent working paper by researchers at the Bank of England. A much larger population of seniors means more demand for safe stores of wealth, such as bonds. This tends to keep interest rates at rock-bottom levels.

The Bank of England researchers concluded that aging populations explain the bulk of the decline in real interest rates since the 1980s. They believe that real rates will keep falling until 2050.

Demographics are not the only factor keeping a lid on interest rates. As Megan Greene, chief economist at Manulife Asset Management notes, a globalized work force, the gig economy and new technology also act to restrain price increases. "We do not expect a late-cycle surge in inflation," she said in a note on Tuesday.

A more imminent danger comes from the extremely high valuations on stocks in many markets. On Wall Street, for instance, stocks are at their second-highest level in history when measured against corporate earnings over the past decade. Those lofty valuations make share prices vulnerable to any sign that earnings growth will fall short of expectations.

"We are reluctant to dismiss the prospect of further market weakness," Jonathan Loynes of Capital Economics said. "We have long warned that the markets were complacent in anticipating a continuation of both strong growth and very low inflation." He expects the benchmark S&P 500 index to drop from about 2,693 now to about 2,600 by the end of this year, with more losses in 2019.

But any market forecast hinges on how corporate earnings progress. For now, economic signals are still strong, notes Eric Lascelles, chief economist at RBC Global Asset Management. However, he concedes that the current business cycle is looking rather long in the tooth.

"Our latest work argues that it is still in the late stage of the cycle, meaning the next downturn would normally occur in the next couple of years, but not obviously tomorrow," he said. 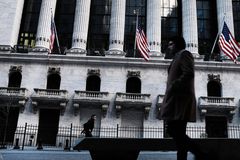