Thomson Reuters Corp. sold a slow-growing, less-profitable business for a wad of cash and plans to use the windfall to reduce debt and buy back a massive amount of stock. What's not to like?

That was certainly the reaction as word of the deal leaked early in the week and shares roared to their highest level since October. But once the company revealed details of its plan to sell a 55-per- cent stake in its financial- and risk-data business to a consortium led by Blackstone Group LP, investors became troubled, with analysts and debt-rating agencies cutting ratings or initiating negative reviews. Thomson Reuters' shares began dropping – and hit a 52-week low on Thursday.

It is a mysterious investor reaction, given the US$17-billion in cash headed to Thomson Reuters – and then mostly to shareholders in a stock buyback that is expected to be worth about US$10-billion.

The concern is that the company is becoming a smaller, less diverse enterprise, yet promising to maintain its dividend while dispensing with fully half of its cash flow. The spun-off Blackstone-controlled business will have so much debt it is unclear Thomson Reuters will ever get any sort of earnings distribution from it. And it is likely unhelpful the company says it will be unable to provide 2018 earnings guidance when it releases its results next week.

Some view Thomson Reuters' financial and risk business, known as "F&R," as the company's crown jewel. It is an attractive operation in an increasingly data-driven world. And few argue that this week's sale price was too low.

Goldman Sachs analyst George K. Tong actually calls F&R the company's "underperforming business," given that it has averaged organic revenue declines of 1 per cent since 2010, versus 1-per-cent gains in the company's legal business and 5.7 per cent in the operation that sells tax and accounting information. F&R's profit margin is also below that of the other two divisions. Mr. Tong, who has a "sell" rating on Thomson Reuters stock, and BMO Nesbitt Burns' Tim Casey, who has an "outperform" rating, both believe investors might assign higher price-to-earnings multiples to the new Thomson Reuters after the divestiture.

Others suggest the company is concentrating its risk by dispatching F&R. Moody's, which placed the company's ratings on review for a possible downgrade on the deal news, notes the legal business will become its largest division, accounting for 63 per cent of revenue, with the tax and accounting unit at 27 per cent and Reuters News at 10 per cent.

Perhaps more important, the deal chops Thomson Reuters' overall revenue from about US$11.3-billion to US$5.7-billion. At the same time, the company has said it will maintain its annual dividend of US$1.38 a share. Cutting the share count will help achieve that, as will a new dividend-reinvestment plan involving the Thomson family holding company, Woodbridge Co. Ltd. (Woodbridge also owns The Globe and Mail.)

Yet, even the bullish Mr. Casey says "the pro forma payout ratio would appear to be aggressive given F&R represents 50 per cent of existing free cash flow."

The Blackstone-controlled F&R likely cannot help. While it will pay about $325-million a year to license the Reuters news product, it will not generate the free cash flow it does now. That's because the Blackstone group, a specialist in the leveraged buyout, is raising US$14-billion of the purchase price from a debt issue that F&R must service with its profits: "$14-billion is a lot of debt," Morningstar analyst Colin Plunkett wrote.

With the new F&R generating operating income of about US$1.4-billion, and the possibility of the debt yielding 5 per cent, F&R will cover the interest with earnings by only two times. "In addition, increasing interest rates show no signs of abating," Mr. Plunkett says. "As a result, this deal gets more expensive by the day."

"As we reflect on the many moving pieces associated with the F&R deal … it's more likely than not that TRI shares will take a pause in the short term," he writes. Investors should hope the tumble of the past two days indeed takes a breather. 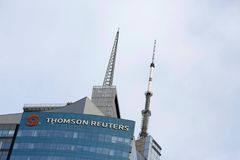 What analysts are saying about the Thomson Reuters-Blackstone deal Subscriber content
January 31, 2018 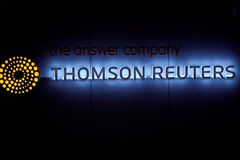