What are the wealthy doing? What are they thinking about the market, their portfolios, stocks, bonds, real estate, and other assets?

Some may answer these questions by saying "who cares?" But I think that's a missed opportunity. Following what the wealthy are doing is like following what investment guru Warren Buffett is doing, or following the "Warren Buffett of Canada" Prem Watsa. It doesn't matter how big your portfolio is - by following the "smart money" you can gain insight about financial issues and investment ideas that you should have on your own radar screen.

Over the years, I've found high-net-worth individuals tend to have a great deal of foresight when it comes to investing. No, they don't get it "right" all of the time (not even Mr. Buffett does). But their "batting average" is consistently higher, and many of them have a good eye for market "turns" - that is, when things are about to change.

One tool I've found useful for tracking wealthy investment trends is the exclusive and anonymous quarterly member surveys from Tiger 21, a high-net-worth, North American peer-to-peer network for investors (minimum net worth of 10M+) interested in learning how to be better stewards of their capital, for the benefit of their families, and philanthropic communities.

The survey takes the form of a confidential questionnaire that asks members anonymously where they have their net worth allocated right now. The organization has about 330 members, spread across Canada and the US. I believe it represents a good cross-section of investment opinions from some very smart people.

Nearly all participants are highly successful investors, and most are entrepreneurs with a very good eye for business. With portfolios anywhere from $10-million right up to more than a billion, they tend to be very good at judging investment opportunities, and, perhaps more importantly, good at identifying risks too.

In Q1 2015, Tiger 21 asked members what their portfolios looked like right now: 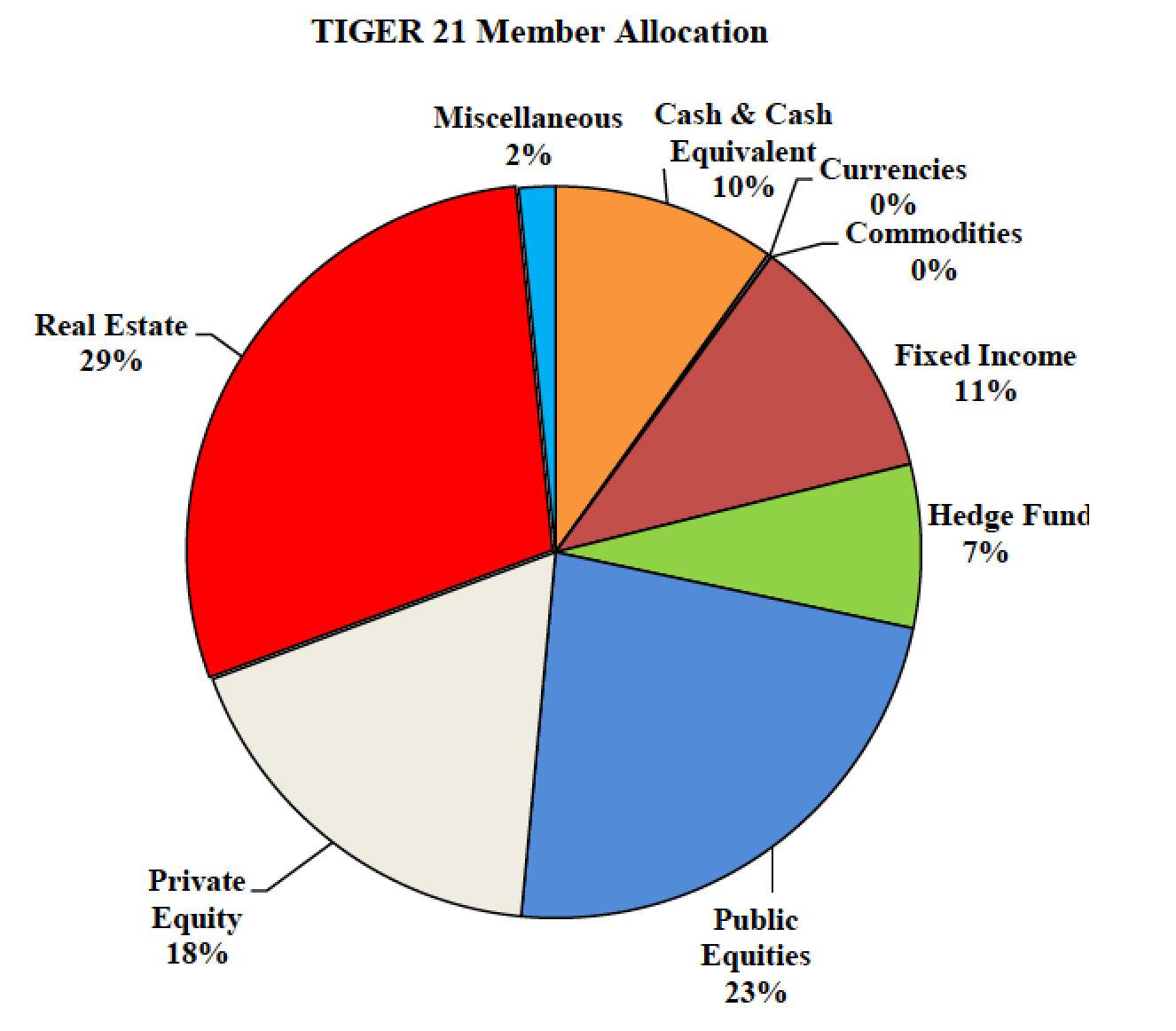 As you can see, real estate comprises the largest portion of the average member portfolio at 29 per cent. Public and private equities are also well represented, but fixed income comprises a relatively small portion (11 per cent) of most HNW portfolios.

These allocations are intriguing when you take a look at how they have changed over time, both quarterly, and on an annual basis.

There are several observations that I make from reviewing the March 31 snap snapshot, as well after reviewing the quarterly and year-by-year changes over the last one to five years. They confirm what I've been thinking about the market for some time lately, and coincide with some of the discussions I've had with HNW individuals since the start of the year

Cautious on stocks - Note that the allocation to public equities has remained essentially flat over several quarters (between 22-24-per-cent of the average HNW portfolio), even while the markets have gone up strongly. It appears HNW individuals have been gradually trimming their positions in order to take some gains off the table. Not cashing out entirely, but scaling back and remaining cautious about new opportunities. This move is entirely in keeping with what I've been seeing over the past several months.

Keeping powder dry - Cash allocation has dropped slightly from last year. However, at 10 per cent, it's still a significant allocation. This confirms a lot of conversations I've had recently: HNW individuals are keeping some powder dry, being patient, and waiting for a more favourable time to enter the market.

Increasing ambivalence about fixed income - One of the most notable changes has been the reduction in allocation to fixed income. It's been reduced from 14 per cent, down to 11 per cent (a drop of about 20 per cent year over year). Looking at the annual allocations, one can see the drop is even more pronounced. Which makes sense as rates have dropped to basically all time lows today. This is the lowest level since T21 began collecting data on member portfolios—a sure sign that HNW individuals are cautious about rising rates, which is currently happening in the bond market in the last two weeks.

Rotation out of private equity - Over the last year, the private equity component has been reduced from 22 per cent down to 18 per cent, slightly less than a 20-per-cent reduction. However, you see that the overall allocation remains relatively high compared to when the survey started. The conversations I've had suggest the change is more about taking profits rather than a lack of confidence in the asset class. HNW investors have done very well with private equity over the last 5-6 years. Simply put, taking profits makes some sense here.

"Building" up real estate - The most interesting finding to me was the real estate allocation. Real estate as a percentage of net worth has increased from 22 per cent to 29 per cent over this last year. That's a significant increase (about 32 per cent year over year). Real estate now comprises the highest level since these surveys began back in 2007. On one level, this makes sense, as HNW investors continue to search for yield.

Very recently, however, the HNW individuals I've spoken to have expressed growing caution about real estate in Canada. These conversations have happened in the last few months, so they wouldn't be reflected in this most recent allocation report. It's an interesting trend, one that I'll be definitely keeping my eye on over the next several quarters.

Thane Stenner is founder of StennerZohny Investment Partners+ within Richardson GMP Ltd., as well as director, Wealth Management. Thane is also chairman emeritus of TIGER 21 Canada. He is the bestselling author of True Wealth: an expert guide for high-net-worth individuals (and their advisors). (thane.stenner@richardsongmp.com). The opinions expressed in this article are the opinions of the author and readers should not assume they reflect the opinions or recommendations of Richardson GMP Ltd. or its affiliates.