Albertans will soon get the opportunity to invest in a part of the provincial economy expected to shine as curbs on carbon emissions increase in the coming years: solar energy.

A group of solar experts and developers plans to offer shares in a co-operative that will build and operate solar-panel farms in the province, where the government has announced a climate-change framework that will favour a lot more renewable power generation.

The idea behind the venture, called Alberta Solar Co-op, is allowing investors to put their money into larger-scale projects as an alternative to installing rooftop photovoltaic panels, said Kristina Groves, board member and spokeswoman. Shares would be eligible for registered retirement savings plans and tax-free savings accounts.

The initial project could begin this year.

"What we're trying to do is build a model with this first project that we can replicate elsewhere in the province," said Ms. Groves, who gained fame as four-time Olympic medalist in speed skating and recently graduated with a master of science in sustainable energy development.

"It's a place for Albertans to invest in renewable energy. Not a lot of people can afford a full system for their roof, or they don't have the right orientation, so this is a way they can invest and see a dividend over time."

The group is in talks with several municipalities for a potential site for a one- to two-megawatt installation, and has begun a crowdfunding campaign to finance securing land and other early planning costs. With two megawatts, the group could power 400 homes. It is also talking to communities about power purchase agreements.

Over all, the first project could cost up to $4-million, Ms. Groves said.

The co-op takes its cue from similar efforts in Ontario, where a feed-in tariff has provided incentives to develop small-scale solar power generation. A Toronto-based group called SolarShare offers members 5-per-cent returns for investing in several rooftop and ground-mount projects. The group sells "green bonds," fixed-term investments that allow investors to back more than 25 installations.

Alberta, much better known for fossil-fuel production, has yet to offer market incentives for developing solar. In fact, industry participants have complained that the market has been skewed toward other sources. Essentially, solar generators are crediting the retail rate for feeding the provincial grid rather than the peak rate, even though they operate at peak times.

Ms. Groves said she and her partner learned about that quirk after installing panels on their own newly built home in northwest Calgary.

However, late last year, Premier Rachel Notley's NDP government announced its long-awaited climate-change strategy, which includes plans to eliminate coal-fired power in 15 years as well as provide incentives for a third of the province's power to be generated by renewable sources. The industry is still waiting for details.

"There is certainly optimism that the government will generate some kind of subsidy or stimulus to get the solar industry going. That would certainly make the projections that we have more favourable," Ms. Groves said. "However, the numbers that we're using right now do aim for a 2- to 4-per-cent return over the life of the project. It's modest, but it's still an investment that will generate return." 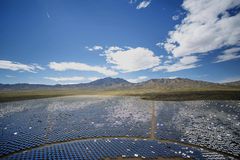 Why I’m buying more of this fallen dividend darling
Subscriber content
January 12, 2016
Follow Jeffrey Jones on Twitter @the_Jeff_Jones
Report an error Editorial code of conduct
Due to technical reasons, we have temporarily removed commenting from our articles. We hope to have this fixed soon. Thank you for your patience. If you are looking to give feedback on our new site, please send it along to feedback@globeandmail.com. If you want to write a letter to the editor, please forward to letters@globeandmail.com.
Comments