It's perhaps the biggest question for financial markets in 2018: How high will Treasury yields climb? The next month may just hold the answer.

After the benchmark 10-year U.S. note yield hit 2.9537 per cent on Feb. 21, a four-year high, it seemed inevitable that 3 per cent was in the cards. Yet buyers emerged, some Wall Street strategists trumpeted their bullish views once more and suddenly the "bond bear market" didn't have quite so much momentum.

Of course, it's natural for market trends to pause before resuming anew, and that may ultimately be the fate of the $14.5-trillion Treasuries market. Federal Reserve Chairman Jerome Powell's Congressional appearance on Tuesday spurred a selloff and although longer-dated Treasuries recovered some ground on Wednesday, shorter-dated notes remained under pressure and the flattening of the yield curve continued.

Traders and strategists are sensitive to lessons learned just last year, when a wave of optimism over growth and inflation sent 10-year yields to 2.6277 per cent on March 14, a level that wouldn't be seen again in 2017. Now just weeks away from the anniversary of that peak, the prospect of yet another fake-out lurks in the background of the latest pullback to about 2.88 per cent.

Italians go to the polls on March 4 as citizens grapple with the country's relationship with the European Union, taxes and immigration. The German bund market isn't reflecting much risk of a flight-to-quality trade, helping to keep 10-year bund yields near the highest since 2015.

Germany itself will learn on the same day if the Social Democratic Party, which suffered a historic defeat in September, will accept or reject a coalition agreement with Chancellor Angela Merkel's Christian Democrat-led bloc.

The yield spread between 10-year Treasuries and similar-maturity bunds remains near the highest since the 1980s. A surprise anti-euro Italian election outcome would probably spark a rally in both debt markets.

The next risk comes just four days later from the European Central Bank's policy decision. President Mario Draghi told lawmakers in Brussels this week that the bank needs to be "persistent and patient, because the underlying inflation hasn't shown any convincing sign of an upward tick."

Indeed, data this week showed German inflation slowed to the weakest pace since November 2016. Coordinated global tightening is a cornerstone of wagers on higher yields ahead.

The most important factor in the global rise in long-term yields "seems to be the market attempting to discern how to accurately price the post-QE era for the ECB," TD Securities strategists Pooja Kumra and Richard Kelly wrote in a Feb. 27 report. "We expect policy normalization in the Euro area to be much more gradual."

Back in the U.S., the Labor Department releases February jobs data on March 9. That includes the highly scrutinized gauge of wage growth, which was blamed for the correction in equities this month after the reading for January showed the biggest gain since 2009.

Each of those data points will feed into policy makers' thinking when they meet in Washington on March 20-21. The Federal Open Market Committee will almost certainly raise interest rates at the meeting, Fed funds futures data show. The group will also update their projected path of rate hikes, known as the "dot plot."

Powell said in a question-and-answer session on Tuesday that his outlook for the economy has strengthened since December, leaving bond traders to ponder the prospect of four rate hikes in 2018, like strategists at Goldman Sachs Group Inc. and JPMorgan Chase & Co. already project.

Such a shift would support the current level of two– and five-year Treasury yields. Tempered optimism from U.S. central bankers could disappoint bond bears and spark a rally in a market that's pricing in almost three Fed rate hikes in 2018.

"The key risks are around the inflation data" leading into the March Fed meeting, said Blake Gwinn, a strategist at NatWest Markets.

The U.S. Treasury successfully issued $258-billion of notes and bills over the span of just three days last week, though it came at a price. Its next challenge: selling an enlarged slate of debt that includes 10– and 30-year securities.

Earlier this month, the U.S. sold $24-billion of 10-year notes with the weakest demand in five months, at a yield almost 1 basis point higher than indicated pre-sale. The $16-billion 30-year bond auction, the biggest since 2015, also drew lackluster demand, particularly from investors like pensions and mutual funds.

The Treasury will add an extra $1-billion to each of those maturities at its auctions on March 12 and 13 as part of its borrowing plan. It'll also issue $28-billion of three-year notes, the most since 2014.

The increased U.S. borrowing, combined with the Fed trimming its balance sheet, has been a key backstop to the bond bears' argument for higher yields. If the auctions go smoothly, it could suggest that market already reflects the prospect of supply indigestion.

"Demand exists for Treasuries when preceded by an appropriate concession," BMO Capital Markets strategists Ian Lyngen and Aaron Kohli wrote in a Feb. 27 note. "We expect that the vast majority of the supply dynamics are fully priced-in at this point," though yields may have room to rise further as auction size increases become clearer.

It's no coincidence that the bond rout that began in September coincided with Japanese investors cutting their holdings of U.S. Treasuries.

America's second-largest foreign creditor has scaled back on U.S. debt for five straight months, Treasury Department data show. At about $1.06-trillion, the holdings are the smallest since 2011.

Some bond bulls are counting on the country's March 31 fiscal year-end to turn the tide back in favor of Treasuries. Over the past 10 years, July has historically been the month in which Japanese investors have flocked to U.S. government debt. Lately, the last three months of the calendar year have seen the biggest outflows.

Unlike the previous few years, however, Treasuries didn't rally to start the year. That might be because Japanese investors are still getting paltry yields on the U.S. 10-year note on a hedged basis, and going unhedged is also risky because the dollar appears to be mired in a prolonged slump.

"There is interest in buying Treasuries and getting some exposure at these kind of levels" among Japanese investors, NatWest's Gwinn said. "How they play in the market around their year-end, I certainly think that's one of the X-factors over the next month or so."

Too much is being made of the bearish U.S. bond data Subscriber content
February 21, 2018 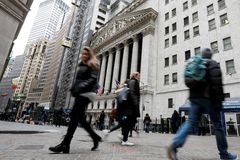 Analyst poll: TSX seen at record high at year-end, other global markets also seen gaining
February 28, 2018
Link between stock market volatility and returns? There is none
February 21, 2018
Report an error