Canadian Solar Inc.'s share performance has been anything but sunny this year, with the stock falling about 50 per cent since the start of 2016.

Like other large solar companies, Guelph, Ont.-based Canadian Solar has been hit by investor worries that the sector is entering a cyclical downturn that will make a big dent in margins and profit over the coming year. A glut of solar panel production, combined with a levelling off of demand, has put pressure on most stocks in the industry.

But Canadian Solar chief executive officer Shawn Qu has seen this before, and he insists his firm will make it through the downturn.

"We have successfully navigated numerous ups and downs since founding Canadian Solar 16 year ago" and the objective this year is to "play safe," he told analysts on a conference call last month. In an e-mail this week he added: "We have prepared for this cycle. I am quite confident in Canadian Solar's ability to grow and perform in both 'high' and 'low' seasons."

Mr. Qu started the company in 2001, initially making solar devices to keep car batteries charged when new vehicles were sitting in outdoor parking lots. Since then it has become one of the world's largest solar companies with annual revenue of $3.5-billion (U.S.). It has several solar panel plants in Asia and two in Canada – in Guelph and London, Ont. – and is also a major global project developer, building dozens of solar farms for its own portfolio and for others.

Since then, there has been a boom in demand from North America and Asia, which have caught up with Europe's early interest in solar power.

In recent months, however, China has reduced its subsidies for solar power installations, and the U.S market has also slowed. At the same time, most of the major solar panel makers have been in expansion mode, building new plants and expanding existing ones. That overcapacity is putting downward pressure on panel prices, and has dented margins.

Many investors appear to believe this downturn is similar to the last one and it will put companies at risk, said Greg Payne, vice-president of portfolio management at Greenchip Financial, a Toronto-based clean-tech investment firm. But Greenchip remains heavily invested in the solar industry, including owning shares of Canadian Solar, and "we believe it is way too heavily discounted," Mr. Payne said.

Large panel makers have been preparing for the drop in prices by cutting costs, he said, and are stronger than they were in 2012. Over the longer term, the outlook for the industry is extremely bright, he added, as solar becomes competitive with other forms of energy production in more and more markets – without government help. "It is pretty easy to see this industry standing on its own two feet economically, without subsidy, in a five-year time frame," Mr. Payne said.

Canadian Solar itself projects solar power to grow dramatically in the next 15 years, generating as much as 10 per cent of the world's electricity by 2030, up from less than 1 per cent today. To deal with the current issues, though, it has slowed the expansion of its solar panel manufacturing capacity, and cut other costs. At its Guelph plant, for instance, hundreds of people have been laid off and some of its production lines shut down.

The company also cancelled a plan to spin off its completed solar farms into a "yieldco," a separate publicly traded entity that would have paid dividends based on cash flow from the projects. It will instead sell finished projects individually to help strengthen its balance sheet.

Still, many analysts who follow Canadian Solar cut their ratings or outlook on the company as the stock price dropped, even if they remain positive on the company over the longer term.

Jeffrey Osborne of Cowen and Co. cut his target price on the stock (which trades on Nasdaq) to $13 from $20 in August, saying the company's cost reductions will be outpaced in the short term by solar panel price drops. But he also said he sees Canadian Solar as "a long-term survivor in the space."

At the end of August, Moody's Investor Service cut its outlook on Canadian Solar to negative from stable, citing an increase in debt as the solar panel market weakens. It said the company's rating could be downgraded if it has trouble selling some of its completed projects.

But Philip Shen at Roth Capital Partners still rates the stock as a "buy" with a $20 target, saying company management "has been somewhat prescient heading into this downturn" because it quickly reduced inventory. "We expect [Canadian Solar] to navigate this cycle better than others," he added.

This week the Ontario government cancelled plans to build another 1,000 megawatts of renewable energy, saying the province does not need the electricity and wants to keep power prices low. A quarter of the new capacity would have been solar, so the move is a blow to suppliers of panels and other parts.

Canadian Solar CEO Shawn Qu called the decision "misinformed and shortsighted." He said the price paid for solar under the new contracts – which are set by competitive bidding – would have been "very competitive" with other energy sources. He also said that while the Ontario Liberal government's policies have helped create a world-class renewable energy industry in the province, "the shortsighted and hasty policy change will reduce and may wipe out [the province's] advantage in solar, one of a few industries expected to grow continuously in the next 15 years." 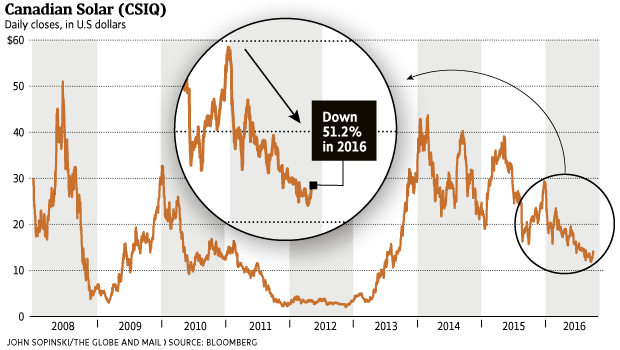