I've enjoyed your previous articles on Canexus, while it hovered around $5.

Now at just below $3, I'm curious of your current thoughts?

What impact do you think the sale of NATO might present?

Hey Justin, Thanks for the assignment and its good to hear you have made use of the analysis.

This will be the 4th time that the particulars regarding Canexus Corporation (CUS) will be examined. The last time was on Aug. 6, 2014, when the shares were trading for $4.67. Darrell was interested in the dividend and wanted to know if it was a good time to buy. The analysis reconfirmed that the shares were labouring under an established downtrend that started in June of 2013, and the influence of a death cross that formed in August of 2013. From March through August of 2014 CUS had established a range-bound pattern with support at $4.60 and resistance at $5.00.

It was advised that if Darrell was bound and determined to be a buyer that he phase in his purchases to get a better sense of direction. In hindsight that was the right move. The stock poked its head above $5.00 at the end of August but that was it. CUS started a precipitous decline in September, breaching support at $4.60 and falling to a 52-week low of $2.60 in December of 2014.

A run of the charts will identify patterns that need to be considered regarding this stock. 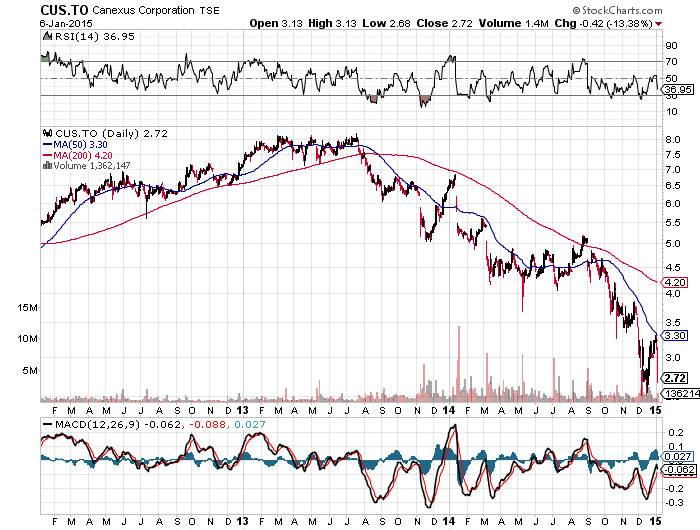 The three-year chart illustrates the downtrend that has gripped CUS since July of 2013. The breach of support at $4.60 in early September of 2014 was foreshadowed by the sell signals generated by the MACD and the RSI. What we can also observe on this chart is that there is enduring resistance along the 50– and 200-day moving averages. 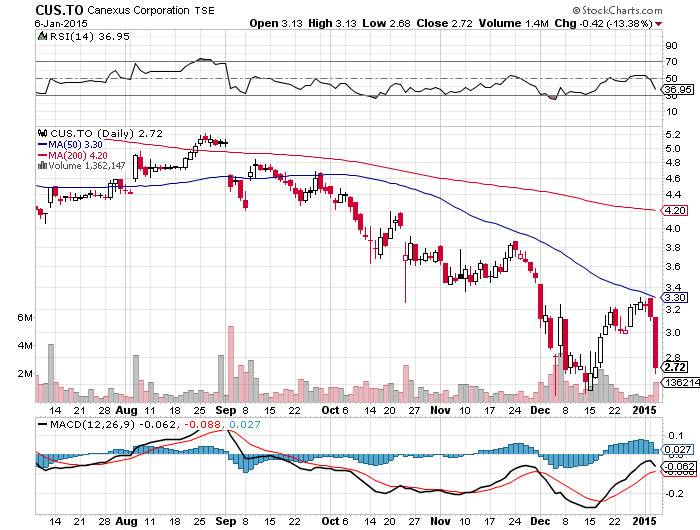 The six-month chart puts a spotlight on the sell signals generated by the MACD and the RSI in September and the buy signal that surfaced in December as CUS bounced off the 52-week low. The December advance to $3.30 wasn't long lived and the shares pulled back as resistance came in along the 50-day moving average.

You asked about the proposed sale of the the North American Terminal Operations crude by rail facility and what it might imply for the stock. With the energy sector in flux because of falling prices the sale seems to be backing into a stressed market place. Companies are cutting budgets and shedding assets and that usually leads to deals, even great deals, getting ignored.

With the evidence at hand don't expect a trend reversal in the near term.