Tiger cubs including Lone Pine Capital LLC, so-named because their founders worked for billionaire Julian Robertson's Tiger Management, helped lead a rush into the Chinese online retailer's U.S. depositary shares in the first quarter. Hedge funds hold a record 44 per cent, based on publicly disclosed holdings. That's more than they own in any of the 217 other U.S.-listed companies valued at more than $25-billion (U.S.).

The hedge funds, which also include Carlyle Group LP's Emerging Sovereign Group, are piling into a company that's benefiting from surging online shopping in the world's second-largest economy. Investors are betting a burgeoning middle class and growing Internet user base will help extend the 78-per-cent rally since JD.com's initial public offering a year ago.

"People have taken a look at this company, some great funds, and they like what they see," Dan David, co-founder of Skippack, Pa.-based research firm Geoinvesting, said Monday. "Hedge funds tend to do a lot more diligence on the companies they invest in than a mutual fund or any other kind of fund. They have a vested interest to take a much closer look on the ground. They see value there."

Hedge funds own about 12 per cent of Chinese rival Alibaba Group Holding Ltd., which has dropped 7.2 per cent since its September IPO, and 5.1 per cent of Apple Inc., according to data compiled by Bloomberg. The 32-per-cent stake they own in Allentown, Pa.-based Air Products & Chemicals Inc. is the largest after Beijing-based JD.com.

Lone Pine, the $29-billion hedge fund run by Stephen Mandel, and one of the largest Tiger cubs, added almost 30 million shares of JD.com last quarter, bringing its total stake to $1.1-billion through March 31. Tiger Global Management, the investment firm run by Chase Coleman, quadrupled its stake in the company by the end of the quarter to $615-million, according to its most recent 13F filing.

Other cubs that bought JD.com, which has a market value of about $47-billion, include Coatue Management and Fox Point Capital Management, while Mr. Robertson's Tiger Management added more than 427,000 shares.

Yale University-backed Hillhouse Capital Management trimmed its stake by nine million shares in the quarter to 143 million shares, or $4.2-billion.

Spokesmen for Lone Pine, Coatue and Carlyle declined to comment on the trading, as did a spokeswoman for Tiger Global. A request for comment from Fox Point wasn't returned on Monday.

"Lone Pine is very well known for its deep, methodical and meticulous fundamental research and analysis," Peter Halesworth, founder of Heng Ren Investments, which invests in Chinese stocks, said Monday from Boston. "This is a vote of confidence in JD.com's business model."

About 29 per cent of JD.com's shares are held by investment advisers including OppenheimerFunds and Baillie Gifford, while pension funds own just more than 3 per cent, filing data show.

JD.com, which follows a model similar to Amazon.com Inc., managing inventory and selling products such as home appliances, books and clothes directly to consumers, said May 8 that first-quarter revenue rose 62 per cent to 36.6 billion yuan ($5.9-billion U.S.), beating analysts' forecasts.

Twenty of 29 analysts who cover the company recommend buying the stock, while only one suggests selling. The company's shares are forecast to climb 10.5 per cent in the next 12 months to $37.48.

"Right now if you believe that the online shopping experience in China is starting to become higher quality, and that's what the consumer wants and will demand, then it makes sense JD.com would be the company that you would be investing in," Mr. Halesworth said. 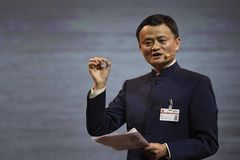 How will Alibaba fare in a crowded technology field?
September 15, 2014
Report an error