There have been better first months as a public company, certainly.

Oh, it went swimmingly at first for DavidsTea Inc., the Montreal-based chain of shops that sold its shares in the United States on June 5. The company priced its shares at $19 (U.S.) and closed at $27 on its first day of trading. In the first few days on the Nasdaq, the shares pushed $30.

And then, on June 16, it was time for the company's earnings. Investors took a look at the numbers and sent the shares crashing 25 per cent, just about a dozen days after the hot IPO.

This leads, I think, to two questions. One, should investors have seen the collapse coming? And two, now that the past is past, is DavidsTea's new price (it closed Thursday at $21.16) a buying opportunity, or a more appropriate valuation for an already dented growth story?

The timing of the IPO – after the close of its quarter ended May 2, but before the earnings announcement – made things a little tricky. That's why the company chose to preannounce some of its first-quarter numbers in its IPO prospectus, right up top in the summary. It disclosed its revenue, its same-store sales (growth at locations open at least a year), its number of stores, and its gross profit, which is the difference between revenue and the cost of the goods it sold.

Of course, there are a lot more expenses to be accounted for before a company goes from gross profit to net income. And when the earnings came out, investors found that many of those numbers were unpleasant. The company had an operating loss when costs of conducting the IPO were included. And the company's net loss was a shocking $93.2-million (Canadian).

Now, this net loss was about as innocuous as the per-share loss of nearly $8 can be. As a private company, DavidsTea had a slug of preferred stock that the owners could convert into common shares at favourable terms in an IPO. This conversion feature was, in essence, a derivative financial instrument, and each quarter, the company took a loss as the value of its common shares grew. When the IPO pricing came into view, the conversion feature became even more valuable to these early investors, and even more expensive to the company. Hence, a $90.7-million non-cash loss on the derivatives alone, the vast majority of the $93.2-million net loss.

Perhaps the company could have been a little clearer in telegraphing this number prior to the offering (although it admits it has had a "material weakness" in its accounting because of past errors in making this specific estimate). Actually, though, it may not have been the loss that displeased investors as much as the company's outlook.

As part of its forecast, Davids-Tea guided investors to expect negative "adjusted EBITDA" (earnings before interest, taxes, depreciation and amortization) in the second quarter and adjusted EBITDA for the full year that's just a bit above prior-year levels. Forecasted revenue implies a growth rate of about 20 per cent, year-over-year. And the company said its same-store sales would be "in line with our longer term target range of low to mid-single digits."

It's quite possible that investors didn't think DavidsTea would be settling in to its "longer term target range" of growth – namely, slower growth – quite so soon. In its IPO roadshow presentation to investment banks, DavidsTea noted it had compound annual growth rates from 2011 to 2014 of 50 per cent for sales and 65 per cent for adjusted EBITDA. The smallest same-store sales number it had reported in the past three years, prior to the recent quarter, was 8.2 per cent. And that 20 per cent sales gain it forecasts for 2015 was also described as a "long-term growth target," not something that was occurring now. (The company declined to make this presentation available to Vox this week, but the kind folks at analysis firm IPO Candy did.)

This has left the analysts covering DavidsTea – all of whom work for the investment banks who underwrote the IPO – in an uncomfortable position. Most have initiated their coverage with a "neutral" rating. Kelly Bania of BMO Nesbitt Burns' U.S. arm has a target price of $21 (U.S.). Ms. Bania noted that at Monday's closing price of $22.48, DavidsTea was still pricier than a group of early-stage, high-growth consumer companies and, importantly, above where another tea retailer, Teavana, traded both at its 2011 IPO and when it was subsequently acquired by Starbucks Corp.

I approached DavidsTea with my questions more than a week ago, but, alas, the company said it had entered another "quiet period" in which it couldn't say anything. Which, given how its first post-IPO announcement went, may be best for its investors. 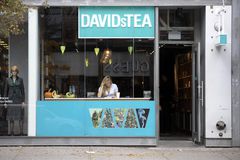 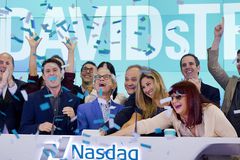 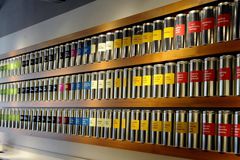