Could you please give me your analysis on DH Corporation. Is it a good company to have in your holding? It has not been performing well the past few months.

Does it have a good or troubled future?

Thanks for the assignment. This will be the second time that I inspect the charts for DH Corporation (DH-T). The last was on Dec. 5, 2011 when the shares were trading for $14.94. Morton wanted my opinion on a hold or sell decision he was considering. The survey indicated that the stock was trading in a down channel after having retreated from a 52-week high near $22.

With the evidence at hand, it was suggested that the stock could be considered for a tax loss sale and a repurchase in the new year. That turned out to be the right strategy. In early 2013, the shares started a multi-year advance that touched a 52-week high of $44.14 in late July of 2015.

In 2011, the company was known as Davis & Henderson Corp. and it was transitioning away from its core business of printing personal and business cheques for banks. In 2006 the core business represented 90 per cent of revenue. By 2010, management had worked that down to 46 per cent with lending technology and servicing solutions making up another 48 per cent. Today, DH has the cheque printing component down to 20 per cent and their various financial technology offerings providing a new focus for the business.

An updated probe of the charts will form the basis of my analysis. 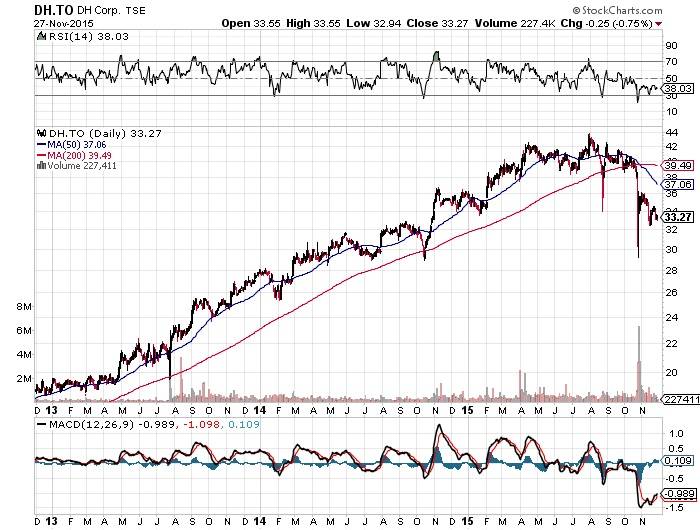 The three-year chart provides a textbook example of a long-term advance coming to an end. The moving average convergence divergence (MACD) and the relative strength index (RSI) generated sell signals in early August of 2015, followed by a breach of the uptrend line later in the month. In September, DH broke below the 50-day moving average and then the 200-day moving average in October. The death cross that formed later in October set the stage for aggressive selling that took the shares down to the 52-week low of $29.15. The selling pressure that surfaced in late October has been attributed to short-sellers attacking the stock. 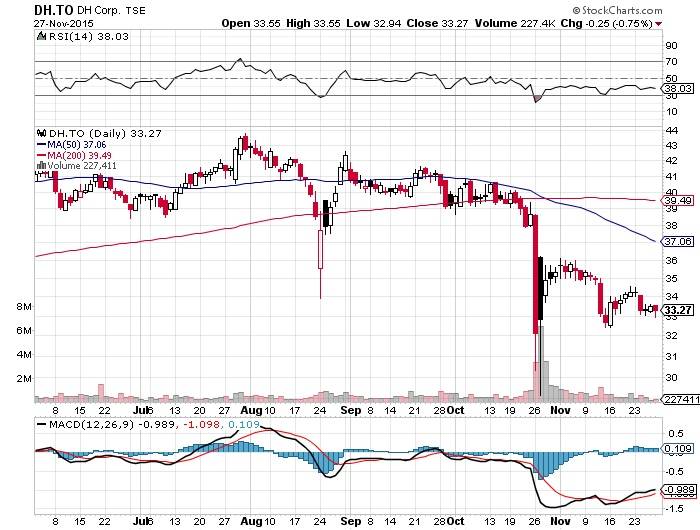 The six-month chart provides a close up look at the bearish patterns mentioned and the spike in volume that occurred as the shares fell in late October. The stock traded five- to ten-times its average daily volume as the short sellers borrowed shares and sold them for cash.

At this point, you might want to keep your powder dry and see if the short sellers have moved on.

Next time I will examine the charts of BlackBerry (BB-T) for Carl.