The flood of bad news that is sinking the rest of the mining sector is providing an unexpected lift for Canadian gold producers.

Barrick Gold Corp. shares have jumped 20 per cent in the first few days of 2016. Goldcorp Inc. stock has climbed 12 per cent while shares of Agnico Eagle Mines Ltd. have surged 16 per cent.

Gold is traditionally billed as a haven for nervous investors and gold-mining stocks have shot up in tandem with worry about China's sputtering economy, Middle Eastern tensions and North Korea's nuclear bomb test.

In addition, some observers believe gold will move into a supply deficit beginning this year. After seven years in which global mine production ramped steadily upward, the world's output of mined gold may begin to gradually fall back in 2016.

A Credit Suisse report in December predicted that mine output will shrink by about 4 per cent a year until 2018. Analysts Anita Soni and Robert Reynolds said the declining supply would help gold reach $1,150 (U.S.) an ounce this year. It rose to around $1,109 an ounce on Thursday.

To be sure, any prolonged ascent in gold prices still faces major hurdles. The U.S. Federal Reserve began raising its key interest rate last month after years of keeping it at near-zero levels.

Rising interest rates – especially in real, or after-inflation, terms – have discouraged gold investors in the past because the precious metal pays no dividend and produces no income. As the real payoff from bonds and bank accounts ticks upward, the allure of gold is likely to diminish.

For now, however, gold miners are enjoying a surge of interest that producers of industrial metals can only envy.

China is the major consumer of most non-precious metals and signs of slowdown in its opaque economy are fuelling fears about what lies ahead for global commerce.

A weaker-than-expected reading on a Chinese purchasing managers' index, published earlier this week, put investors around the world on high alert. The plunge of the benchmark Shanghai stock index in recent days and a cut in the official value of the Chinese currency have added to worries about whether the Asian giant is headed for a sharp downturn.

Prices for many key raw materials have responded by hitting fresh multiyear lows, with copper prices sinking to their lowest levels since 2009 on Thursday. Several other commodities, such as iron ore and coal, are already trading for a fraction of the highs they reached at the peak of the commodity cycle a few years ago.

The companies that mine those basic materials suffered a horrific 2015 and their ordeal shows no signs of letting up. Glencore PLC, the massive producer-cum-trader, lost 70 per cent of its value last year and endured another 8-per-cent drop on Thursday. Meanwhile, Anglo American PLC, the shrinking giant that is slashing tens of thousands of jobs, took an 11-per-cent hit on the day.

By comparison, gold looks positively healthy. While its current price is still far below the $1,900 an ounce it reached in 2011, it is well above recent lows below $1,050.

However, not everyone is convinced the metal will hold on to its recent gains. "This is just the fear trade ... it's a temporary phenomenon," said Sid Subramani, a precious metals analyst at Veritas Investment Research in Toronto.

He expects gold will finish this year around $1,000 an ounce and he believes it is likely to remain in that area until higher-cost miners begin to reduce their output. New mines are still being brought into production and he is skeptical that long-term gold output is contracting in any meaningful way.

Mr. Subramani has "buys" on only two gold producers – Barrick Gold Corp. and Eldorado Gold Corp. A 10-per-cent gain on Thursday has already propelled Barrick past the target price he set in a mid-December report. 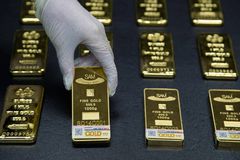 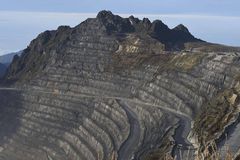