Just a heads up on Goldcorp. It looks to me like a reverse head and shoulders with good performing RSI and a MACD that may turn positive shortly.

Thanks for the advisory.

Goldcorp Inc. (G) has been suffering like all the gold producers as the price of gold has not been able to regain sustained upward momentum since it started to sell off in October of 2012 when it traded close to $1,800. When the price of a company's primary product is weak one of the key responsibilities of management is to reduce costs and that's what has been the case here. When G reported its first-quarter 2014 results, all in cost per ounce was reported at $840.00 an ounce -- significantly lower that the $1,134.00 reported a year earlier. 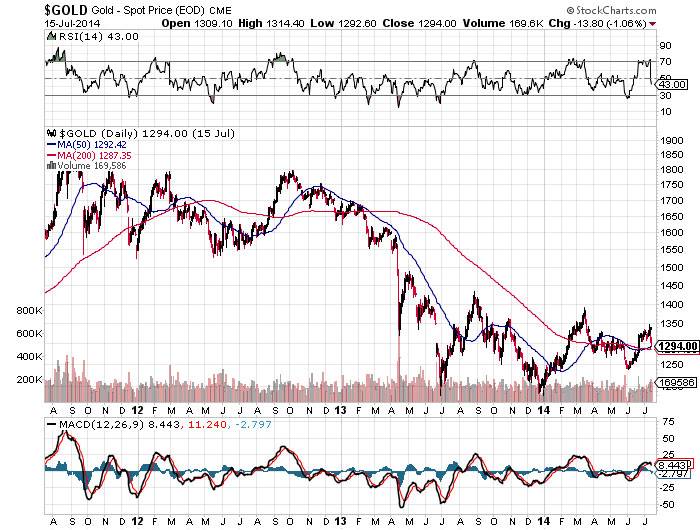 The three-year chart for gold indicates that the downtrend that started in October of 2012 has at the very least been broken. On March 12, 2014, Marty had asked me if it was time to buy precious metals and based on the research conducted he was advised to begin to slowly accumulate a position. Gold has yet to establish a new uptrend and would have to move through resistance at $1,350 with conviction to signal that buyers were in control of the market.

The three-year chart for G is very similar to the chart for gold itself. As to your observation of a reverse head and shoulders pattern on the chart, it looks like you have a sharp eye. A reverse head and shoulders pattern signals a reversal of a downtrend and precious metals investors need it like flowers need the rain! I agree with your observation but want to see the stock move through $32.00 just to take some of the risk off the table. What we can say with certainty is that the downtrend that started in October of 2012 when the shares were trading close to $45.00 has been broken.

The six-month chart points to support building at $29.00. Before jumping in aggressively make sure to watch the MACD and the RSI like a hawk. The momentum indicators produced strong buy signals in June as the stock bounced off $25.00 and ran to its current level. At this time the MACD and RSI are indicating that enthusiasm is weakening slightly.

The best way to approach this stock is with a long-term view. Management has forecast increased production through 2015 which is one shoe to drop the other the other that needs to fall is of course the price of gold.