The vampire squid is swimming listlessly.

Goldman Sachs went from the pinnacle of Wall Street to the poster child for its excess. The "vampire squid" is what Rolling Stone polemicist Matt Taibbi dubbed the investment bank in 2009, claiming it was "wrapped around the face of humanity, relentlessly jamming its blood funnel into anything that smells like money."

Now, Goldman is just plain boring. Its above-expectations first-quarter earnings, released just before the Good Friday market holiday, elicited a yawn from investors. The stock, at $158.24 (U.S.), trades right around its book value. That's less than one-third of its price-to-book multiple in early 2007, before the financial crisis.

"In its partnership days, Goldman allowed only partners and certain select employees to buy stock at book value," writer Andrew Bary said in a recent issue of Barron's. "Now, anyone can."

Few, if any, believe Goldman can return to its peak profits. The better question, though, is whether Goldman can get closer than it has so far – and what that means for Goldman's shares in the next year or two.

"We're seeing improvements in their businesses, but they seem to be more gradual than in past cycles, and that gets to the issue of how some of the businesses have structurally changed, for Goldman and some of the other major banks," says analyst Ken Leon of S&P Capital IQ, who has a "hold" rating and $160 target price. "Trading just above book value looks to be an opportunity, but … getting significantly higher returns compared to where they are now might be challenging to improbable."

Its two larger businesses by revenue relate to trading, investing and lending. The institutional client services segment contains Goldman's business of market-making and trade execution of its clients' securities. The investing and lending segment constitutes Goldman's own money-making activities. The trading business, with its growing risks and rewards before the financial crisis, helped push Goldman to a return on equity of more than 25 per cent in 2006 and 2007. Post-crisis, Goldman agreed to become a U.S. bank holding company, subject to greater protections, but also greater regulation. That has blunted profitability: Return on equity over the past 12 months was 10.5 per cent, according to Capital IQ.

"Goldman Sachs was elevated to the most profitable and arguably best investment bank on Wall Street due to its trading operations," says Morningstar analyst Michael Wong. Now, he says, increased capital regulations make it harder to profit from a bond-trading business, for example, because you can't hold as much inventory. Another new regulation, the Volcker Rule, completely bans certain types of trading. "In this new environment, being the best trader on Wall Street may not make you the best investment bank on Wall Street, like it did in the past."

It'll be at least a year until economic conditions stabilize, he says. In the meantime, Goldman is not as far above certain regulatory capital ratios as it would like, and that will restrict the company's ability to buy back shares and pay dividends.

Analyst Brad Hintz at Bernstein Research went through an exercise in a December report where he tried to answer the question: "What is Goldman Sachs' peak performance?" Mr. Hintz looked at past peak revenue figures for each of Goldman's business segments (some dating back as far as 2000) and combined them with significant expense reductions, which Goldman has been working on since the crisis.

Should all the businesses return to their peak, Mr. Hintz figures, Goldman could hit a return on equity figure of 15 per cent, and shares could trade at $239, or more than 1.6 times book value. "But we caution that achieving this peak – 15 per cent ROE – in the near term is unlikely and would require a nirvana-like environment to be realized," he says.

Importantly, though, when Mr. Hintz plugs a peak scenario in just one of the Goldman businesses into his models, he generates valuations for the shares right around $200 a share, a 25-per-cent gain over current levels. It helps explain why Mr. Hintz, unlike a number of more cautious analysts, has a "buy" rating and a 12-month target price of $205.

"Unlike many of its competitors – which are withdrawing from certain businesses, sharply de-emphasizing their capital markets commitments, or abandoning certain geographies – [Goldman] is committed to remaining a leading force in the global capital markets," Mr. Hintz says. "The market remains uncertain about this strategy … Bernstein is more optimistic."

If so, the vampire squid might resume its blood-sucking ways – for shareholders' benefit. 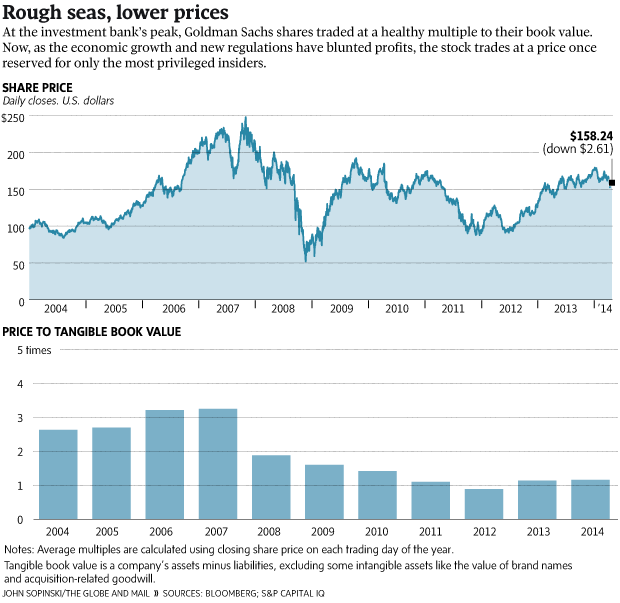 Goldman Sachs opens up: How the investment firm is changing its image
March 29, 2014 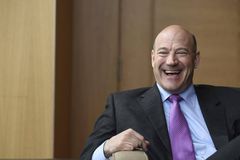