Prospects are looking brighter in the Canadian oilpatch as commodity price increases drive higher profits and afford companies room to offer dividend hikes and share buybacks – but slumping stock prices show that the oil and gas sector remains in the penalty box with investors.

It's getting so bad that not even Canadian institutional investors can be convinced to buy Canadian energy company shares, says Grant Fagerheim, CEO of Calgary-based Whitecap Resources Inc.

"We want to get Canada back, to be proud Canadians, to be proud producers of our own products and not be penalized for it," said Fagerheim in an interview after returning from disappointing meetings with investors in New York last week.

"The question we are continually asked, whenever I'm on the road, is, 'Why would we invest in Canada right now, when there isn't a consistent policy on energy or the economy?' ... Even the Canadian institutional investors are skeptical about investing in Canada."

Investors have been turned off by the lack of export pipeline space for oil and gas, Canada's failure to match U.S. reductions in corporate taxes, higher personal taxes north of the border and numerous ongoing reviews and changes to provincial and federal regulatory systems that create uncertainty, he said.

The pipeline capacity issue has grown worse since the Energy East pipeline to Eastern Canada was cancelled last year after the National Energy Board said it would use a tougher review process that would include looking at indirect emissions related to the pipeline, from production to end-use of the oil.

Prime Minister Justin Trudeau approved Kinder Morgan's Trans Mountain pipeline expansion to the West Coast in 2016, but rejected Enbridge's Northern Gateway pipeline to Kitimat, B.C. Since then, the NDP government in B.C. and protesters have been trying to disrupt Trans Mountain construction.

Whitecap's story is typical of a sector that just can't seem to do anything right these days.

In November, it announced it would buy a stake in the Weyburn, Sask., CO2 enhanced recovery light oil project from Cenovus Energy Inc. for $940-million and, based on the predicted increase in revenue, would raise its dividend by five per cent.

Its shares, which closed at $9.11 that day, fell as low as $7.48 in early March and closed at $7.99 on Friday – although the majority of financial analysts currently rate it as a "strong buy."

So far this year, the S&P/TSX Capped Energy Index has fallen by almost 10 per cent, despite dividend increases and share buybacks by several of its 38 constituents, who represent the cream of the Canadian energy sector.

The reward for dividend increases has been hit and miss. Shares in heavy oil giant Husky Energy Inc. and liquids-rich gas producer Tourmaline Oil Corp. have risen since they announced higher payouts to shareholders in early March.

But shares in oilsands and refining company Suncor Energy Inc. have been little changed since it raised its dividend by 12.5 per cent on Feb. 7.

The companies announcing share buybacks, which return cash to shareholders both directly by providing a buyer for their shares and indirectly by giving each remaining share a bigger equity stake in the company, have included Suncor, Canadian Natural Resources Ltd., Encana Corp., Birchcliff Energy Ltd. and Paramount Resources Ltd., among others.

They say their shares are so inexpensive it's cheaper to buy back their stock to improve performance per share than it is to grow the business by investing in finding and developing new sources of oil and gas.

Analysts are left shrugging their shoulders.

"It feels like a complete sense of apathy among investors – especially in Canada – and I have no doubt that a large portion of that is due to the pipeline issues," said analyst Nick Lupick of AltaCorp Capital.

"So some are taking the stance of, 'Forget it, why bother? I'll go elsewhere until they figure it out."' He said the cheap stock prices will likely result in more mergers and acquisitions in the next 12-18 months.

A report by analysts at CIBC concluded that "Canadian energy looks cheap, both from a historical and relative perspective," adding Canadian producers are trading at cash flow multiples far below American rivals despite having generally better debt positions.

"I think it is a report card on Canada," said Tim McMillan, CEO of the Canadian Association of Petroleum Producers, which has launched a campaign calling for lower taxes and fewer regulatory hurdles to restore competitiveness with the United States and other global producers.

"I certainly hear back anecdotally from a very wide range of companies that are out trying to raise capital and the Canadian brand today is one where investors don't see certainty, where they see layered-on costs, where they don't see a clear path to market access and they're voting with their dollars.

"That's why we see Canadian investments continually being downgraded." 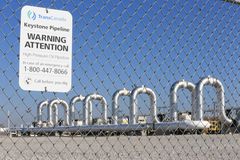