Perhaps Jonathan Goodman can do it again. That's the overriding rationale required to invest in Knight Therapeutics Inc., the second act for the man who took Paladin Labs Inc. from a small spinoff to prominent drug distributor.

History repeating itself might be a risky bet in general, but not necessarily an unwise one in this case, given Mr. Goodman's credentials.

Here, investors have the chance to "get in early on a potential Paladin Labs 2.0," as National Bank Financial put it last week in initiating coverage of Knight's stock.

These are still very much early days for Knight. It has no debt and a decent pile of cash, in addition to an uncashed lottery ticket in the form of a rare U.S. "priority voucher" that allows for a quicker drug approval process. These amount to plenty of resources to deploy in a strategy that has worked well in the past.

"I have considerable comfort that it will continue to progress," said Michael Smedley, chief investment officer at Morgan Meighen & Associates. "It's in the hands of the right people."

Mr. Goodman founded Paladin Labs in 1995 and over the course of nearly two decades, established a Canadian pharmaceutical star. He did so primarily by distributing proven drugs licensed or bought from other companies.

A brain injury resulting from a 2011 bicycle accident and the long recovery afterward compelled Mr. Goodman to put the company up for sale. The 2013 deal made with U.S. drug giant Endo Health Solutions Inc. valued Paladin at $3-billion.

In the five years before the deal closed earlier this year, Paladin's stock rose by more than 1,000 per cent, from around $12 to more than $140, earning the loyalty of many investors who were shrewd or lucky enough to stick with the company.

"He'll have loyal investors out of Paladin who will wait patiently," Mr Smedley said. "That's how he was able to raise money so easily."

Since going public in March, Knight has raised more than $250-million in private placements. And the company has quickly established a $450-million market cap despite having the rights to just one drug – Impavido, which is used to treat leishmaniasis, a parasitic disease – and little in the way of revenues.

The company's valuation can be broken down into three components. The first is about $235-million in cash, amounting to about $3 a share, or more than half of Knight's current share price of $5.76, as of Thursday's close.

Secondly, the company is in possession of a priority voucher allowing its holder to expedite the approval of a new drug through the U.S. Food and Drug Administration. Just four such certificates have been awarded, and one recently sold for $67.5-million (U.S.).

In August, Knight announced plans to sell its voucher, and the estimates of its value have reached as high as $200-million, Mr. Smedley said. National Bank Financial analyst Leon Aghazarian has applied a more conservative $75-million value, amounting to about $1 per share. He has a target price on the stock of $6.50 (Canadian).

The third source of value priced into Knight's stock represents some faith in the company as a smart allocator of capital. "You're placing some value on the intangible of management," said Paul Moroz, deputy chief investment officer at Mawer Investment Management, which owns shares of Knight.

Mr. Moroz cautions that prospective investors should have a long investment horizon when it comes to Knight. "It's going to be a very long time of compounding and building [a royalty] stream," he said. 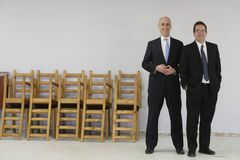