Last week, Ian asked for studies of Cogeco Cable Inc. (CCA -T) and Shaw Communications Inc. (SJR.B-T). He was attracted to the appreciation of the shares and wondered what was driving the advance. In the case of CCA the stock had been on a run since 2012 and was driven by increasing profits and dividends. Today, an analysis of SJR.B will identify the particulars associated with this company.

This will be the third time that I examine the stock. The last time was on May 23, 2012 when the shares were trading for $19.48. Susan had bought her shares at  $21.32 and was satisfied with the 4.70 per cent dividend yield but wanted to know what might push the stock higher. The research indicated that the stock was range bound with support at $19 and resistance at $22. It was advised that she would be best served trading the stock in the range and collecting the dividend until there was better visibility regarding a breakout or a breakdown.

In retrospect that was the right call as the stock started a sustained advance in August of 2012. Another run at the charts will provide additional depth to decisions regarding Shaw. 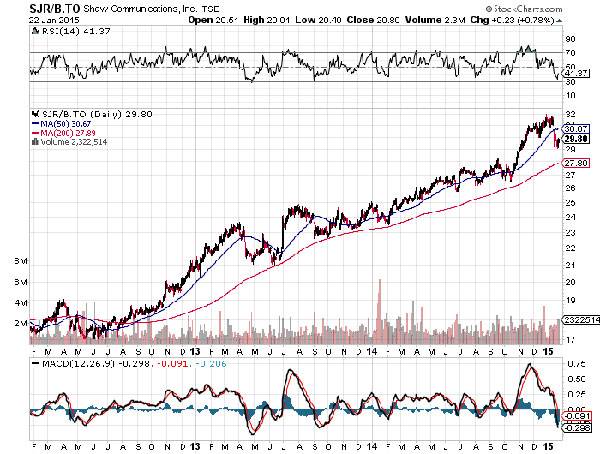 The three-year chart exhibits the same characteristics as the three-year chart for CCA. Most notably an advance that started in 2012 and a golden cross that formed early in the run notifying investors that they could expect more to come. An established uptrend and support along the 200-day moving average are typically patterns that point to increases in share prices. The surge higher in October of 2014 was driven by fourth-quarter results that reported a significant increase in profits and free cash flow. 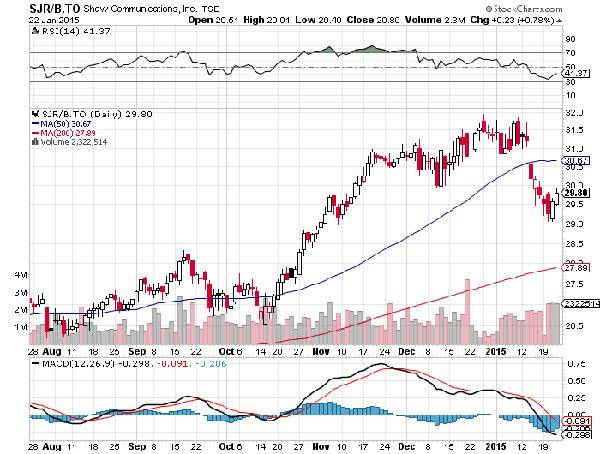 The six-month chart depicts the resistance at $32 and the bounce SJR.B caught off of $29. The MACD and the RSI look to be turning higher although they are not currently generating a definitive buy signal. With a dividend yield of 4.04 per cent and a solid position in the communications space, Shaw is a hold.