Global growth is on a tear, and that can only be positive for metals prices.

That's the message coming from the industry ahead of LME Week. For the first time in years, optimism is widespread among traders, smelters, miners and brokers gathering in London, buoyed by a combination of strong growth across the world's key demand centres, supply curbs in China and a return of investor interest.

"The global economy looks much better than it has done probably since the crisis – maybe before that," said Saad Rahim, chief economist at Trafigura Group PTE, the second-largest metals trader. "I'm pretty bullish."

The upbeat mood shows how much has changed in two years, when the commodities collapse brought the titans of mining to their knees. In September, 2015, Glencore PLC was forced to raise money when its stock was cratering, an effort to soothe investors frightened by a staggering debt load. Now, the mining giant has regained its swagger, reaping profit and inking deals worth billions for natural-resource assets around the world. On Monday, the company raised its profit forecast for its trading division, citing strong third-quarter performance.

Industrial metals have rallied sharply since the middle of the year. Copper is near $7,000 (U.S.) a metric ton, zinc topped a decade high and aluminum has jumped almost 30 per cent this year. With that backdrop, macro hedge funds – once major players on the London Metal Exchange – are beginning to look again at metals markets, according to brokers.

"Investor appetite has been increasing for metals since late summer," said Sid Tipples, co-head of metals at JPMorgan Chase & Co.

Volumes on the LME have picked up, hitting the highest level since September, 2015. Matthew Chamberlain, chief executive of the exchange, suggested there's further room for growth.

"Before the funds are actually in the markets, they're working out the best entry strategy and getting ready, and that certainly seems to be the mood music in the market," he said in an interview.

For the first time in years, the outlook for global metals demand doesn't hinge solely on China. Manufacturing in the euro zone is growing at its fastest pace since at least 2014. This month, the International Monetary Fund upgraded its growth outlook for the United States, the euro zone, Japan and China and said the global economy's performing at its best pace in the past 10 years.

Metals demand in Europe is picking up on the back of rising demand from the construction and automotive sectors. Codelco of Chile, the world's largest copper producer, raised the premium it charges to deliver metal to European customers for the first time in four years. Forecasters including Bank of China International see further gains for base metals in a period of synchronized global growth.

"The economic outlook is stronger than it has been for a while across the major economies with more consistent growth in Europe, the U.S. and China," JPMorgan's Mr. Tipples said.

The supply issues are being felt in corners of the physical metals industry that are largely inaccessible to financial speculators.

For example, the price of alumina, used to make aluminum, has jumped 56 per cent since August, according to data from consultancy CRU Group, amid Chinese production cuts that fuelled a wave of buying by aluminum smelters.

Lead ore treatment charges, which miners pay smelters to convert the ore to metal, are moving negative. Cargoes of lead concentrates have changed hands at treatment charges of minus $40 a metric ton, traders said, an unusual situation that implies traders are paying more for lead ore than the value of the metal.

On the LME, overall inventories are being drawn down. Stocks of metal in the exchange's warehousing system have dropped to the lowest since 2008.

"We've seen inventory draws across the board on the LME, and the underlying demand picture would suggest those draws are real," said Ingrid Sternby, senior research analyst at Blenheim Capital Management LLP, a commodities hedge fund in London. "The market now is at a point where fundamentals are playing a more important role."

"I'm concerned we have got into this zone where people think everything is just going to get better and better," he said. "China has just done its Party Congress. We've probably reached peak credit creation for this cycle in China."

He warned that miners could respond to the recent rally by adding new production, especially in zinc where prices are trading far above the cost of production.

"Two years ago, things were pretty dreadful for the mining industry. Things are pretty good now. The supply discipline that kicked this rally off can dissipate in the next six to 12 months," he said. 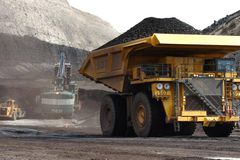