Lou, What do you think about investing in Mason Graphite? I believe Tesla Motors requires a specific quality or grade of graphite mined in the Quebec region.

Mason Graphite Inc. (LLG) is pushing to bring its 100 per cent owned Lac Gueret property into production by the fourth quarter of 2015. The deposit is located in northeastern Quebec near Baie-Comeau. The company expects a twenty-two-year mine life with annual production of 50,000 tonnes of flake graphite. The direct capital cost is $89.9-million, which is considered low. The demand for graphite is expected to grow as China, which produces 70 per cent of global output, is proving to be an unstable supplier.

The research conducted on your behalf indicates that you are correct on some aspects of Tesla's need for a supply of high-quality graphite. The electric car manufacturer recently announced that they would be building their $5-billion Gigafactory in Nevada and would require up to 93,000 tonnes of flake graphite every year. I see the demand boost as a good thing but there is no guarantee that the supply will come from LLG or any other deposit in Quebec.

An examination of the charts will add texture to your decision to invest in this mining company. 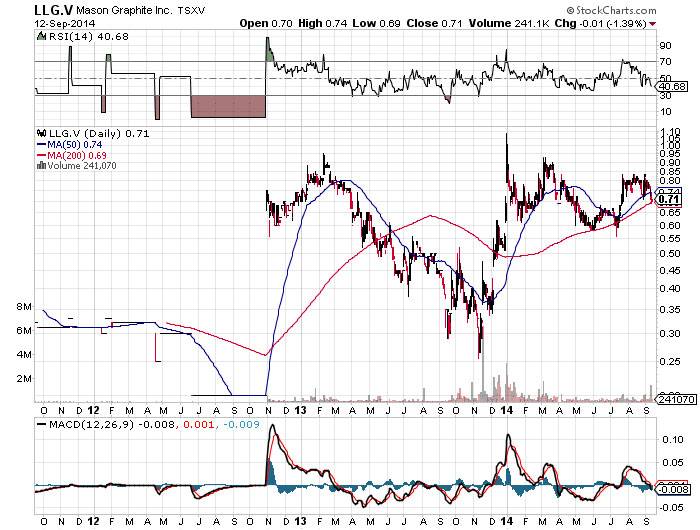 The three-year chart immediately called for a search of the data stream to explain the huge gap up in November of 2012. As suspected the cause of the move was the reverse takeover of a pool company on the venture exchange to provide LLG with a listing. What is also evident is that most of 2013 was dominated by selling pressure as investors took advantage of the liquidity event.

The stock caught a bounce off of $0.25 in November of 2013 and has provided a number of trading opportunities through the first nine months of 2014. Currently the shares are testing support along the 200-day moving average. 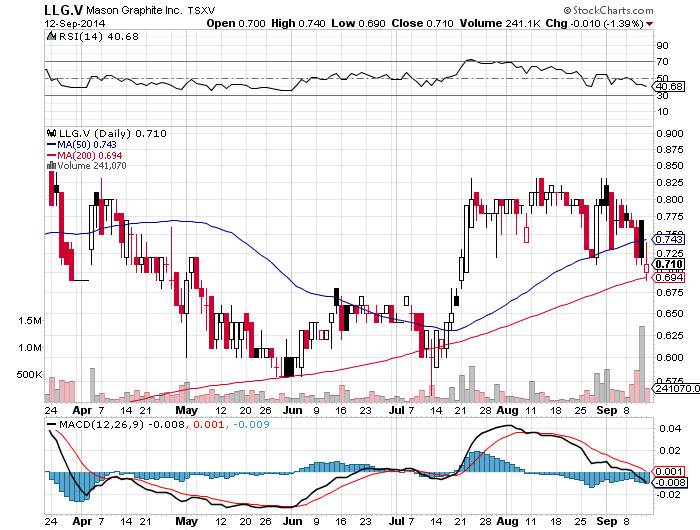 The six-month chart provides a close up of the resistance that has formed at $0.80. In July the MACD and the RSI both generated profitable buy signals as support at $0.60 held and the shares rose to resistance at $0.80 for a 25 per cent gain in approximately ten days. At this juncture the momentum indicators are not pointing to a trend reversal.

LLG is a low-cost opportunity to get in on a micro-cap pure graphite play. Keep in mind that this investment would have to be considered as part of the speculative portion of your portfolio. If you like the story and can accept the risks you could start building a core position in the stock while conducting a competitive analysis to see what other companies are working the same turf.