Love receiving your analysis articles. Can you take a look at New Flyer and see if it still has any gas in the tank?

This will be the second time that I examine the charts for New Flyer Industries Inc. (NFI TSX). The last time was on August 29, 2014 when the shares were trading for $13.50. Ilona wanted to add to her holdings of green stocks and was looking for an entry point for NFI. The research indicated that the shares were pulling back from a 52-week high of $14.08 and were on trend to retest support at $13.00.

It was also mentioned that the uptrend line and the moving averages had been tested but not breached since the advance began in 2011. It was advised that there was scant evidence that we could expect a trend reversal at that time.

In hindsight that was the right call. NFI did retest support along the 200-day moving average in December of last year and then started a new up-leg, taking the shares to a new 52-week high of $20.88 by late September of 2015.

Another audit of the charts for this stock follows. 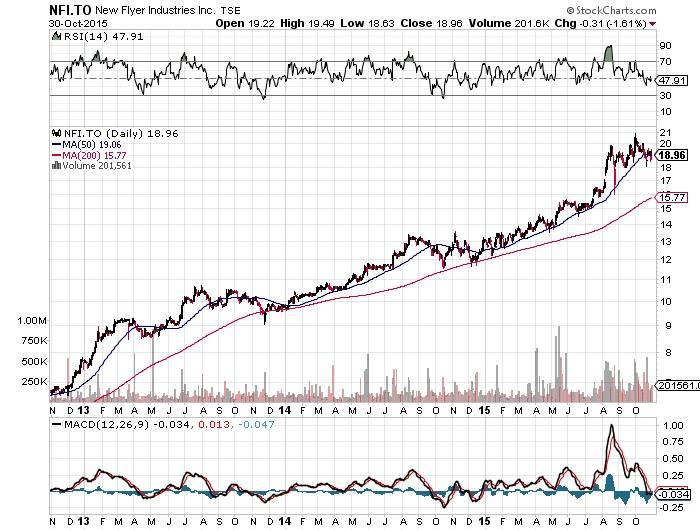 The three-year charts provide a textbook example of a long-term wealth-generating advance. What is observable is that the stock has been consolidating in the $18.00 – $19.00 range and has been testing support along the 50-day moving average. Not to be ignored are the MACD and the RSI, which are not pointing to a new leg up starting in the near term. 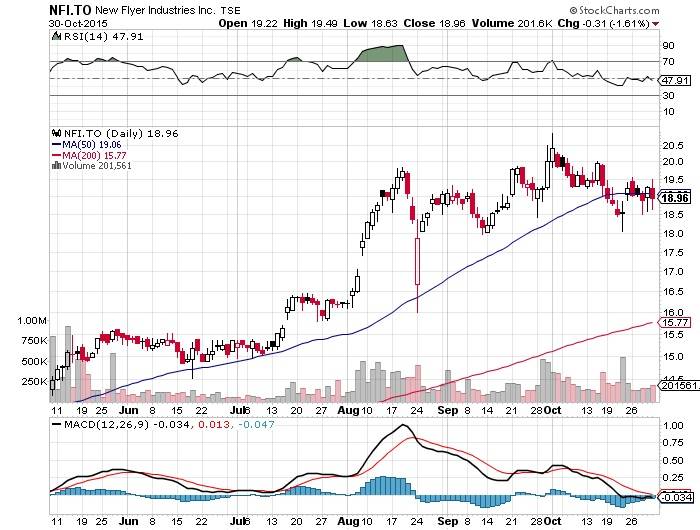 The six-month chart provides a close-up of the overbought situation that surfaced in August and the retreat that retested support along the 50-day moving average. The bounce off $16.00 took the shares to the 52-week high in late September but has since pulled back. It would be wise to wait for the release of Q3 data on November 4, 2015 to get better clarity on trend before making a buy decision.

Next time I will inspect the charts for Sienna Senior Living Inc. (SIA TSX) for Kaimraj.