Thanks for the assignment and your kind words.

Plaza Retail REIT (PLZ.UN) owns and develops enclosed and unenclosed retail real estate in every province except Saskatchewan. Their portfolio includes 229 properties with 6.6 million square feet, plus the trust is developing another 16 properties which will add 584,00 square feet to the total. In addition they have purchase agreements on three additional properties.

The trust has a history of increasing distributions to unit holders. The current annualized distributions yield 6.02 per cent. The rub as far as I can see is that the units have not held their value over the last nineteen months, which is a call for further investigation. 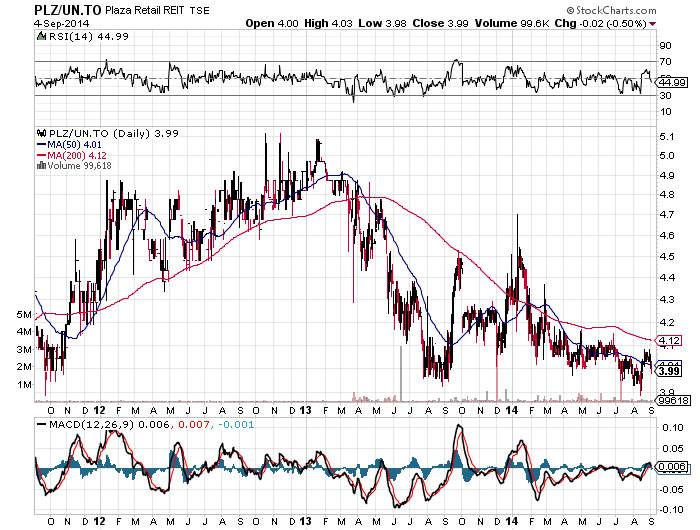 The three-year chart presents a number of patterns. The January 2013 high near $5.10 represents the end of the advance that started in late 2011 and the beginning of the decline investors are currently dealing with. The MACD and the RSI both have generated a number of buy and sell signals as the trust units have retreated, which demonstrates the often-made point that there are trading profits to be made, even in a downtrend. What is also visible is the resistance that has formed along the 50- and 200-day moving average since February of 2014. 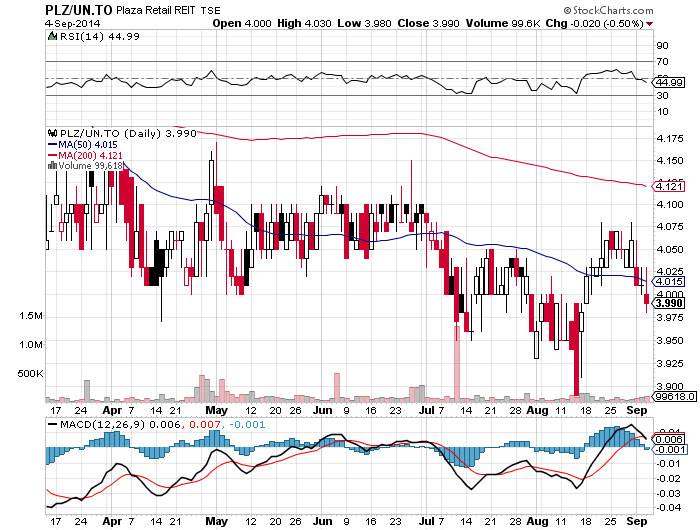 The six-month chart depicts the selling pressure that has met every effort to move higher as resistance has formed near $4.10 and along the 50-day moving average. We also have the MACD and the RSI indicating that we can expect more selling in the short term as PLZ.UN struggles to hold support near $4.00.

One of the concerns regarding this REIT is the debt load that they are carrying. REITs are leveraged investments by nature, but if the analysts that cover PLZ.UN would like to see a reduction of debt then management would be well advised to address the issue.

What caught my eye was the fact that 24.7 per cent of gross revenue comes from Shoppers Drug Mart. The recent takeover of the chain by Loblaw Companies Ltd. might change the nature of the relationship. If you are attracted to the distribution then buy some now and then wait for better visibility as to direction.