Mark Bunting is a host at Bloomberg TV Canada, and the publisher of The Capital Ideas Digest, a weekly compilation of investment ideas based on a variety of research reports. The Globe and Mail provides marketing services and receives compensation from its parent company, Capital Ideas Research. Try it now to get your first month for free.

Technology's disruption of traditional business sectors continues at a rapid pace. A good example is in the field of advertising where dollars are increasingly veering away from print, television and radio to online, mobile and social media.

What is programmatic advertising?

Canadian company AcuityAds Holdings Inc. (AT-X) is at the forefront of that transformation. It specializes in what's called programmatic advertising where algorithms are used to allow advertisers to target, connect with, and accumulate data about their campaigns and their audiences. One of AcuityAds' co-founders has a PhD in machine learning and algorithms. It's one of the reasons the company believes its patented technology stands out from its peers.

When a person searches online for a Costa Rica vacation, for example, and then starts getting fed ads on Costa Rican flights and hotels, that's the kind of targeting AcuityAds is facilitating for its more than 150 customers, which range from Fortune 500 companies to small-to-mid-sized businesses. Toyota and A&W are two companies that have used AcuityAds' services.

It's that kind of growth that got AcuityAds voted this year as one of the Top 10 Tech Stock of Year by the TSX Venture Exchange for the second consecutive year.

The company's market cap is just more than $100-million (Canadian). Even though the AcuityAds shares have more than doubled in the last year, the four analysts who cover the stock are each projecting more upside.

An interview with the CEO of AcuityAds

Capital Ideas Research spoke with AcuityAds chief executive officer and co-founder Tal Hayek. I started by asking him about larger U.S. competitors such as Trade Desk Inc. (TTD-Q), which has a market value of more than a $1.7-billion (U.S.), and private company Media Math.

"They used to be a lot bigger than us, but we're growing so fast that we're going to be catching up to them eventually," Mr. Hayek says. "That's one of the reasons we started our acquisition strategy because we wanted to move faster. We felt that we were too small on our own, and it's going to take too long to get there on our own."

"We kind of have a rough idea that we want to buy around two companies this year," Mr. Hayek says. "It could be more, it could be less. We are very, very actively looking. We have people who are on it on a full-time basis. I, personally, speak to companies every week."

"We see ourselves continuing to grow on the organic side aggressively, and then the acquisitions are going to be going on top of that," Mr. Hayek says. "We believe that this year Europe is going to be a driver. In the future, we can get into more geographical areas. Eventually, we want to be a global company."

To that end, AcuityAds recently opened a sales office in London, England.

How does AcuityAds differentiate itself from other companies in the advertising technology sector?

"It's all down to the algorithm," Mr. Hayek says. "We have a great, great algorithm that delivers amazing return on investment (ROI) for brands. That's how we've grown our business since we started. As long as that's the case and we deliver great results for clients, then that's how you win the game. At the end of it, I do think the space is big and there's going to room for a few players in it."

"The whole idea was build the algorithm in a way that delivers a positive ROI for clients," Mr. Hayek says. "As long as they get a positive ROI, they're going to spend more with us. And that's proven itself to be a very good concept because we deal with advertisers. When they make money using our system, they're very happy and they spend more money on our systems."

Is Mr. Hayek concerned that in the fast-growing, rapidly changing sector in which AcuityAds operates, a new technology or unforeseen competitor could emerge to disrupt its model?

"Digital advertising is an $83-billion (U.S.) market place. $51-billion out of that is already programmatic," Mr. Hayek explains. "All the pipes are already built, it was a fundamental shift that this is how we do this kind of business."

Its message to shareholders

"Acuity is a great growth story. We've delivered 19 quarters of growth on a year-over-year basis, which is every quarter since we started the business, so over 50-per-cent growth," Mr. Hayek says. "There's really great momentum behind Acuity today."

This company’s stock could jump on FDA clearance for its brain device
January 4, 2017 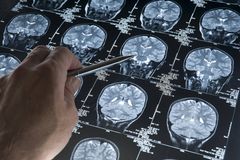 How Benj Gallander’s ‘system’ helps him beat the TSX
December 12, 2016
A top pick in the Canadian oil and gas sector
November 30, 2016
Follow us on Twitter @globeandmail Opens in a new window
Report an error Editorial code of conduct
Due to technical reasons, we have temporarily removed commenting from our articles. We hope to have this fixed soon. Thank you for your patience. If you are looking to give feedback on our new site, please send it along to feedback@globeandmail.com. If you want to write a letter to the editor, please forward to letters@globeandmail.com.
Comments