The U.S. equity market's biggest winners from the first half of 2016 are back in the spotlight, for all the wrong reasons.

Utilities, consumer staples makers and phone companies -- sectors that usually do well when the economy isn't -- plunged at least 2.8 percent Friday, worse than the broader market. It's an abrupt change for companies that were among the few winners at the start of the year and are often labeled by Wall Street as safety sectors.

The S&P 500 Index rebounded Monday, adding 1.5 percent to 2,159.04 as of 4 p.m. in New York, helping the groups recoup some of their losses. But the valuation of defensive equities remain one of the market's bigger pressure points. Shares of consumer staples stocks trade at 22 times annual earnings, 25 percent higher than the average multiple over the last decade, more than any other group. Utilities companies are 19 percent higher than their 10-year average.

"High valuations in these sectors have been directly proportional to the compression of the term premium demanded in holding long-term bonds, so you could pay a high valuation for dividend yields, staples and utilities," Alex Bellefleur, head of global macro research and strategy at Pavilion Global Markets in Montreal, said by phone. "What happened late last week was a scenario in which people rethink that. Those sectors, as well as the high-growth stocks that have done well recently, are what's going to drive markets."

Higher bond yields and speculation that the Federal Reserve may be more aggressive than expected on raising interest rates reduced the allure of equity income on Friday, spurring losses in dividend-yielding groups such as phone and utility shares. Indexes tracking those industries tumbled more than 3.4 percent for the biggest retreat since at least February 2015. The duo were the darlings in the year's first half, with returns exceeding 20 percent, as speculation over a delayed rate increase from the Fed sent Treasury yields to record lows.

At the same time, those stocks are now integral to some of Wall Street's favorite investing strategies, among them exchange-traded funds that aim to minimize volatility, and those that track stocks with the most price momentum. Declines in defensive groups meant an even worse day for low-volatility funds than the S&P 500 on Friday.

Rallying utility and phone shares over the past year mean they're now included in trading models that track momentum stocks, which collect the shares that gained the most in the past. Take the iShares Edge USA Momentum Factor ETF, for example: the two groups now make up 15 percent of holdings in that fund, compared with less than 1 percent at this time last year, according to data compiled by Bloomberg.

"The stocks that have been preferred for so long are those dividend stocks, so some of the stock exposure is very credit-like and you have that high correlation between stocks and bonds," Jeremy Hill, head of markets at Levy Harkins & Co inc. in New York, said by phone. "Yes, there's probably some reallocation to be done, but even in an environment where rates are changing and macro is adjusted that doesn't scream to me that the money that has flown to staples is going to magically reverse itself."

Equities gained Monday amid tempered concerns that borrowing costs could increase as soon as this month. Fed Governor Lael Brainard in remarks delivered in Chicago counseled continued prudence in tightening monetary policy, even as she said the economy is making gradual progress toward achieving the central bank's goals.

The S&P 500 Index bounced from a two-month low with its strongest gain since July 8. The gauge halted declines near its average price during the past 100 days, and the rebound topped out close to its 50-day moving average. The Dow Jones Industrial Average added 239.62 points, or 1.3 percent, to 18,325.07. About 7.8 billion shares traded hands on U.S. exchanges, 15 percent above the three-month average.

"It looks like maybe things got out of hand on Friday afternoon without a lot of people around and maybe it's moderating now," Andrew Brenner, the head of international fixed income for National Alliance Capital Markets, said by phone. "Stocks, bonds, it's all connected right now."

The CBOE Volatility Index dropped 13 percent today, after soaring 40 percent Friday as stocks were jolted out of an eight-week stretch of tranquility amid speculation central banks are preparing to dial back their extraordinary efforts to boost growth. Traders are now pricing in a 22 percent probability of higher borrowing costs when the Fed meets Sept. 21, compared to 30 percent on Friday. December is the first month with at least even odds of a move. 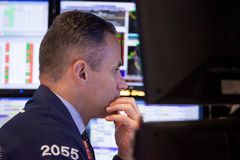 Mohamed A. El-Erian: The latest market sell-off may be different
September 12, 2016 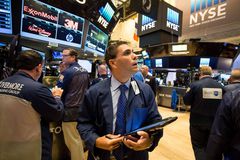