Intrawest Resorts Holdings Inc. is returning to the stock market as a very different company in the same line of business.

When it went private in 2006, Intrawest was essentially a real estate development company that happened to own some ski resorts. Now, the company is going public as a premier resort owner with some real estate on the side.

The recent upsurge in the shares of ski resort operator Whistler Blackcomb Holdings Inc. suggests there may be considerable investor interest in Intrawest, which has filed for an initial public offering of up to $100-million. Although the IPO has yet to be priced, Intrawest is likely to appeal to those who are looking for ways to benefit from an improving U.S. economy and a more upbeat outlook for resorts.

"It's an ideal time to be offering this investment," said Alex Avery, an analyst at CIBC World Markets. "There's a lot of interest and a lot of demand for that kind of asset right now."

Vancouver-based Intrawest was delisted from the TSX in 2006 when it was bought by private equity and hedge fund firm Fortress Investment Group LLC for $2.8-billion (U.S.). The deal happened around the peak of the U.S. real estate market and the timing proved disastrous.

"As was standard at the time, they took out a huge amount of debt," said Mr. Avery. "They levered up and took the thing private in a pretty euphoric period."

By then, Intrawest had established itself as a developer of European-style, pedestrian-oriented resort villages at premier mountain destinations like Whistler Blackcomb in British Columbia and Mont Tremblant in Quebec. "They elevated the ski experience to something like a four-season mountain experience," said Chris Fair, president of Vancouver-based Resonance Consultancy and a specialist in resort and tourism development.

But the model was largely premised on resort residential developments that were designed to appeal to affluent investors who expected rising property values.

In 2006, Intrawest made two-thirds of its profit from real estate. "When Fortress made the acquisition, Intrawest was valued primarily based on the real estate holdings there was to develop within the resorts," Mr. Fair said.

Then demand for resort properties vanished as the financial crisis hit. "All of those assets that had no cash flow went to pretty much zero," Mr. Avery said. "Intrawest had to scramble."

It survived only by selling off the crown jewel of its assets: Whistler Blackcomb, which went public in 2010. Intrawest sold its remaining minority stake in the ski resort last year.

At first, investors viewed Whistler Blackcomb Holdings with lukewarm enthusiasm. "People looked at it and thought of restaurants and airlines, with a lot of volatility and seasonality," Mr. Avery said. But the stock's 60-per-cent gain over the last year indicates investors have regained a level of comfort with resort operators, he added.

Intrawest used the proceeds from its divestments to cut its debt and refocus. According to its filing, its ski operations now generate 65 per cent of its total revenue, which amounted to $524-million in the fiscal year that ended in June. And that's a business that appears set for an uptick as the U.S. economy slowly improves, Mr. Avery said. "It would appear this is a good time in the cycle to be investing in businesses that have exposure to the cyclical recovery."

Investors can also be assured that the supply outlook is not going to change any time soon. "The barriers to entry are significant," Mr. Fair said. "We don't foresee any new mountain destination resorts any time in the next 10 to 20 years." Plus, the U.S. housing recovery strengthens Intrawest's real estate development activities, although those now only account for about 12 per cent of the business.

Investors should keep in mind that Intrawest's equity will bear some important distinctions from that of Whistler Blackcomb. While the latter pays a hefty dividend currently yielding 6.3 per cent, Intrawest said it does not anticipate paying a dividend, which makes sense considering the company still has real estate in which to reinvest, Mr. Avery said. And while Intrawest has some first-rate resorts, Whistler Blackcomb stands alone, he said. It has industry-leading conditions, proximity to Vancouver and the benefit of infrastructure generated by the 2010 Winter Olympics. "It is truly a one-of-a-kind asset."

It's all uphill for Whistler-Blackcomb
October 7, 2010 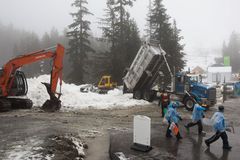