The stock market has been a brutal place, with tumbling commodity prices and China's woes contributing to the worst opening week in history for U.S. equities.

Yet as Canadian and U.S. markets tumbled last week, one of the stocks I own personally – and in my Strategy Lab model dividend portfolio – delivered some positive news: Canadian Utilities Ltd. raised its dividend by 10 per cent, to $1.30 annually from $1.18.

Was I surprised? No. The Calgary-based company has raised its annual dividend every year since 1972 – through assorted booms, busts and financial crises – and, in recent years, the dividend increases have come like clockwork every January. That predictable dividend growth is one of main reasons I own the shares.

Now, I won't pretend everything is peachy with Canadian Utilities. The company's power-production operations have been hit by low electricity prices in Alberta, reflecting a combination of oversupply, cheap natural gas (which lowers the cost of generation) and expectations of slower growth in the province. This has contributed to a hefty drop in the shares, which closed Tuesday at $31.85, down from about $42 a year ago.

But the company still has a lot going for it, which is why I've decided to spend some of the cash in my Strategy Lab model dividend portfolio to purchase an additional 10 shares, bringing my total to 165 (view my model portfolio online).

Buying solid, well-run companies when they are experiencing a temporary setback is a proven investment strategy, and, in Canadian Utilities' case, there are some compelling reasons to take advantage of the recent share-price weakness.

Let's start with the most obvious one: the stock's attractive yield. At the new dividend rate, the shares yield 4.1 per cent, up from about 2.7 per cent a year ago. The stock has traditionally sported only a modest yield; now, investors can get the best of both worlds – an above-average yield plus good dividend-growth potential.

How can I be so sure the dividend will continue to grow? Well, the primary source of Canadian Utilities' current weakness – power production – represents only about 10 per cent of the company's enterprise value, according to analyst Darryl McCoubrey of Veritas Investment Research. The vast majority of the remaining 90 per cent consists of regulated natural gas and electric utilities – both transmission and distribution – that are insulated from commodity prices and throw off relatively predictable and growing cash flows.

"The growth in this company is almost entirely driven by the regulated businesses," Mr. McCoubrey said. "And they're expected to grow by more than $1-billion a year."

According to company figures, Canadian Utilities plans to invest $4.8-billion in its utilities segment from 2015 through 2017. About two-thirds of that is being spent by its ATCO Electric subsidiary, including $1.2-billion on transmission projects directly assigned by Alberta's electricity system operator to expand the province's transmission infrastructure to meet future demand.

"Historically, when you look at what power demand has done in Alberta during periods of low oil prices, typically electricity demand doesn't necessarily decline but it just grows at a slower pace," Mr. McCoubrey said.

The growth in regulated utilities, in turn, should translate into higher earnings. Even with the Alberta economy in a slump, analyst Robert Kwan of RBC Dominion Securities expects Canadian Utilities' adjusted earnings per share to rise to $2.24 in 2016 and $2.39 in 2017, up from an estimated $1.88 in 2015. He expects the company to raise its dividend again next year by 10 per cent, to $1.43 a share, which would still represent a conservative payout ratio of 60 per cent of estimated 2017 earnings per share.

Canadian Utilities is not without risks. A spike in interest rates would probably hurt the shares, as would a prolonged slump in power prices. If crude oil stays depressed for years, that would also not augur well for Alberta's growth in general and the longer-term expansion of the company's utilities operations in particular.

But Mr. McCoubrey said Canadian Utilities could benefit from another development in the province: a shift to green energy. If more solar, wind and hydroelectric plants are built under Alberta's climate-change plan, new transmission infrastructure will be needed to get that renewable power to market, providing another growth opportunity for Canadian Utilities.

There's one more reason to like the stock: it's cheap. Canadian Utilities' ratio of enterprise value (essentially its market value plus debt, minus cash) to its rate base (the value of assets used to determine a utility's regulated return) is about 1.4, compared with 1.5 to 1.6 for other utilities such as Fortis Inc. and Emera Inc., Mr. McCoubrey said.

While that doesn't guarantee the stock won't fall further, it does suggest that the downside may be limited – particularly given the company's growing dividend.

"This is a long-term-hold kind of stock, especially when you see dips like this on economics," said Mr. McCoubrey, whose "intrinsic value" estimate for the shares is $37.50. "Irrespective of whether you think oil prices are going to rebound any time soon, this is still a name that on the whole I see doing relatively well on a long-term basis." 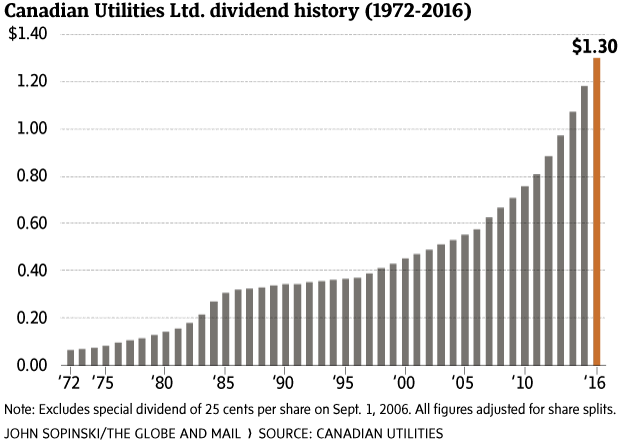 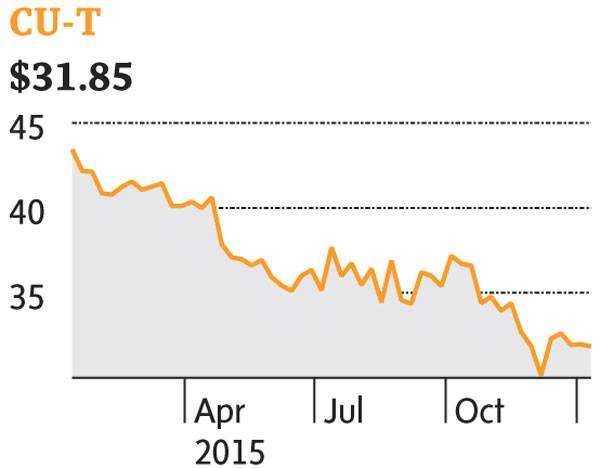