I recently wrapped up another March Break holiday involving a road trip with my family. Last year, I wrote about how easy it was to save money using the services of one of my Strategy Lab picks, Priceline Group Inc. I'm happy to report that since one year ago, the stock is up more than 12 per cent while the S&P 500 is slightly down.

This year we took a budget-conscious trip to Hilton Head Island in South Carolina. We still saved money using Priceline for hotel rooms, but we also spent not a dime on gas because we drove the family's Tesla electric car and charged up using Tesla Motors' proprietary network of "Supercharger" stations that are conveniently located in hotel and shopping centre parking lots along major highways. I've been wanting to do a long trip on the Supercharger network ever since buying the car, but until this year the charging locations weren't plentiful enough to make it as convenient compared to driving our gas-guzzling SUV.

My wife and I were both curious what the trip would be like. Instead of the usual 10 hours of driving and no more than one hour of stops for gas, food and bathroom breaks, a Tesla would necessitate about two hours of stop time for each eight hours of driving.

As it turns out, we were amazed. This trip was much more relaxing despite taking a bit longer. We let the car's navigation and route planning software guide us to each charging station. Sometimes we stopped for 15 minutes, which is barely enough time to grab a Starbucks coffee and give the kids a bathroom break. Other times we would stop for up to an hour because we'd grab a meal or pick up some groceries, which we would have needed to do at our destination anyway. In almost every case, the Tesla app on my iPhone would notify me, before we were ready, that we were charged up enough to continue on our way.

Electric car road trips aren't perfect, as I'll discuss. But in every case the minor issues are bound to dramatically improve over time. For example, the trip definitely took longer because of more required stops. We enjoyed the rests, but for those who prefer to rush, I'm confident Tesla will enable even faster charging and use higher-capacity batteries over time. This would enable longer distances and less charging time.

We also had to plan our route to follow available Supercharger locations, which added about 600 kilometres to what would otherwise have been a 3,400-km round trip if we had taken a regular car. Before the end of this year I expect our preferred, shorter route to have the required stations, making this a short-term problem.

Many hotels and restaurants also now advertise Tesla high-power charging stations that are free to use. In Hilton Head, I was within about one kilometre of two such charging locations, making them more plentiful than gas stations. These "destination chargers" seem to be popping up everywhere.

It feels like the early days of WiFi, when hotels and restaurants would install the free service as a perk to attract customers. The return on investment, I think, is worth it. We chose to enjoy about $65 (U.S.) worth of food and drinks at Bomboras Grille on Hilton Head Island specifically because the owner installed two high-power Tesla chargers in his parking lot. I expect more restaurant and hotel owners will do this until electric vehicle charging is practically ubiquitous, just as we all expect to find WiFi at any decent hotel.

Judging from the number of questions I get about my car, people clearly care a lot about the ability to take long road trips. So far, only Tesla has built out a network to make these trips about as painless as possible. They've got a multiyear lead on everyone else, which is important to me as a growth investor.

Tesla keeps raising the bar. For example, today's vehicles can automatically park themselves in a garage or parking spot. How long before it can drop you off at the front door of a Starbucks and then park itself at a charging bay while you relax? Perhaps not so far off.

Admittedly, a Tesla is an expensive purchase. But on March 31, the company will unveil its $35,000 sedan, the Model 3. This car should have a range of more than 320 kilometres on a single charge and start to ship at the end of next year. By then, I imagine the charging infrastructure will be much more common and software improvements such as "Tesla Autopilot" will make long-distance highway driving a breeze.

Road tripping in a Tesla Model S is fun. But this next car, the Model 3, is why I'm invested in the stock. I'm holding on for the ride – even if it isn't as smooth as our road trip to South Carolina.

Disclosure: The author owns Tesla stock, both personally and in his Strategy Lab portfolio. 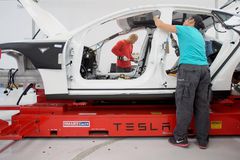 Under the hood, Tesla price target is still supercharged
February 2, 2016 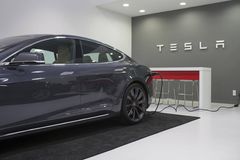