Last week Google Inc.'s stock price pushed past $1,000 (U.S.) for the first time. The search giant, which first traded at $85 per share, has now produced a gain of more than 1,000 per cent for those who bought it during its August 2004 initial public offering (IPO).

In hindsight it's easy to say the stock was a bargain at $85. My contention is that it is still good value at $1,000. I expect more gains from here.

Sure, there may be some bumps along the way. My own investment in Google started in 2008, when I paid $457 per share. The stock had previously hit about $700, so I felt I was getting a deal despite paying more than five times the IPO price only four years later.

I couldn't have been more wrong in the short term. The market collapsed late in 2008 and my precious shares dropped below $300 each.

I didn't worry. I had invested in Google because I had finally come to understand the importance of online advertising, and because I felt that Google's Android operating system posed a significant threat to BlackBerry. Those twin assumptions kept me focused on the business's long-term potential as Google's stock price collapsed in 2009.

My faith was rewarded. But with the stock price over $1,000, there are lots of people who feel that Google must now – finally – be overvalued.

Not so fast. There is nothing meaningful about a four-digit number in isolation. A $1,000 price tag means zilch without looking at the big picture, which includes shares outstanding, business performance, growth opportunities and competitive threats.

The event that drove Google shares to new heights was its latest set of quarterly results. The company's core business revenue (i.e. excluding its Motorola unit) grew an impressive 21 per cent on a constant currency basis over the past year. Operating margin actually went up, which tells us Google is able to grow its earnings faster than its revenue – a very positive sign for a company that is expanding so rapidly.

The core of Google's business remains advertising, and the recent results bear witness to the company's success in that area. Its new "enhanced campaigns", a big new initiative in the Adwords pay-per-click business, is going well, driving more ads to mobile device users – and that mobile audience is growing by leaps and bounds. Just look at Google's YouTube business. A whopping 40 per cent of views now come from mobile devices versus only 6 per cent two years ago.

And there is plenty of room left to grow. According to research firm Magna Global, the global market for advertising reached $495-billion this year. Google controls only about 3 per cent of the total and its market share should grow as marketers shift more and more dollars to the web.

According to venture capitalist Mary Meeker, Americans spend only 6 per cent of their time consuming print media, but advertisers still spend 23 per cent of total ad dollars on this dying medium. This is unsustainable. As more ad dollars flow online and to mobile devices, Google is ideally positioned to benefit.

To be sure, it will never achieve the kind of market share in advertising that Android has in mobile computing, or that YouTube has in online video, or that its Chrome browser has in the browser market. But what if Google moves to 10 per cent of the global ad market in the next decade? Revenue would more than triple from here.

S&P Capital IQ shows me that analysts expect Google to post EPS of about $52 next year. So even after the stock has risen to over $1,000 it's still trading at only about 20 times earnings, which seems reasonable for a company with its growth prospects.

Google dominates online advertising, mobile computing, online video, online e-mail and a bunch of other stuff I don't have room to mention. So is it overpriced at $1,000 a share? I don't think so. I won't be selling a single share. Ask me again in 10 years. 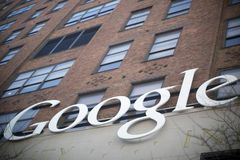